World champ Julian Alaphilippe suffered humiliation at the end of the Liege-Bastogne-Liege 2020 race, raising his hands in celebration only to discover that rival Primoz Roglic had sneaked under his arm to win the sprint finish.

Alaphilippe eased off the pedals and held his hands in the air as he approached the line at the one-day classic in Belgium, signaling his satisfaction after edging in front of several racers in the final stretch.

Just when he thought his hard work had resulted in glory, Slovenian Primoz Roglic – who blew a substantial late advantage to lose the overall lead in the Tour de France last month – sneaked under his outstretched right arm to claim the narrowest of victories in the thriller.

After almost six-and-a-half hours of racing, commentators were saluting an “amazing” finish that appeared to have been snatched by the joyful Alaphilippe as Roglic grimaced behind him.

“At that point, Alaphilippe thought he had it won,” they said, reviewing the action in slow motion as officials took a close look at the footage to decide the winner.

“I think Roglic has got it. Alaphilippe’s arms are now by his side and he is beside himself…[he] has just missed out.”

Alaphilippe had also swerved in front of Tour de France champion Tadej Pogacar in an unorthodox finish that he felt convinced had earned him the Monument.

That prevented Pogacar and Swiss cyclist Marc Hirschi from making a sprint at the line, ultimately earning the crestfallen Alaphilippe a sanction that saw him relegated to fifth place in the final placings.

When asked by people new to cycling what they need to know I give them tips in order of priority. 1, look where you are going. 2, keep pedalling. 3, hold your line. @alafpolak1

will never understand why cyclists can’t just wait to raise their arm after the line. Obviously if they’ve been out front a while and looked back to see they are well clear it’s a different matter but wtf was Alaphilippe thinking.

Schoolboy error by Alaphilipe which is a shame but fine effort by Roglic, never giving up!

While many fans were frustrated with broadcasters Eurosport for another premature finish that meant the program switched to motorsport before the final results were revealed, others offered their congratulations to Roglic.

“Alaphilippe should be relegated anyway after nearly taking out Hirchi and Pogacar,” said one. “Well done, Roglic.”

Another admitted: “Will never understand why cyclists can’t just wait to raise their arm after the line.

“Obviously if they’ve been out front a while and looked back to see they are well clear it’s a different matter, but what the f*ck was Alaphilippe thinking?” 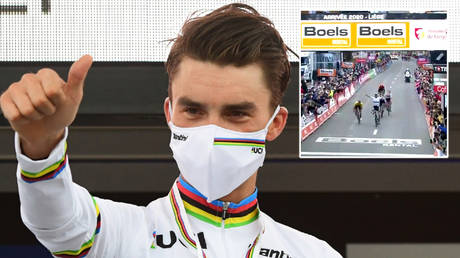 'If somebody cannot cry about...