Things are going from bad to worse for Derby manager Wayne Rooney, who after being embroiled in a social media scandal while photographed with scantily clad women has now reportedly injured one of his best players in training.

At the weekend, the England and Manchester United legend currently in his first managerial role with the Championship outfit gave a scathing interview following his side’s 2-1 friendly loss to League Two minnows Salford City.

To Sky Sports, he blasted the hierarchy at Pride Park and demanded that they “make bigger decisions”.

“All I can do is try to bring some dignity and pride back to this club. It is clear that has gone in the last few years and it is my job to bring that back,” Rooney added.

“I need other people to do their job. It’s not ideal, it has been very difficult not knowing what my squad will be in two weeks’ time when the league starts. However we can, we need to get that sorted.”

“If I am being honest, it would be easy for a manager in my situation to walk away,” he stressed.

“It’s a challenge for me, I’m a fighter. I am grateful to Derby for giving me this opportunity and I will do everything I can to get the club through this.”

Yet on the same day his legal team complained to the police about a series of photos featuring Rooney and a group of scantily-clad women leaked onto social media – allegedly taken on Saturday with a string of 21-year-old women as Rooney partied into the small hours – he did little to help the cause by reportedly crocking one of the few seniors at his disposal.

Due to a lack of stars, Rooney, according to The Telegraph, had to make up the numbers in a drill at Pennyhill Park – a luxury hotel and spa located in Surrey, southern England where Derby’s pre-season camp is being held.

During a “50-50” challenge, the all-time top scorer for his country went all in, and has now injured midfielder Jason Knight for up to 12 weeks leaving the club, who have had a transfer embargo lifted to form a bare minimum squad of at least 23 players, in further crisis. 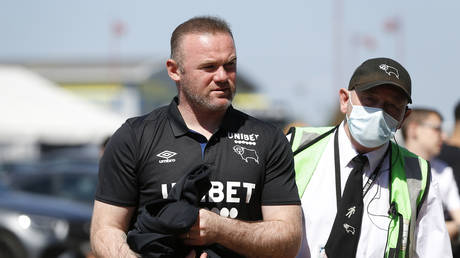 ‘Blooper of the year’: Striker rid...

How to get Dark Mode on Snapchat o...