She may be softly spoken and shy, but Canadian flyweight Gillian Robertson made a little piece of history on Saturday night as she became the fighter with the most submission finishes in UFC women’s history.

Robertson, whose fighting nickname is “Savage”, submitted fellow contender Cortney Casey with just 28 seconds remaining of their flyweight fight at the UFC Apex on Saturday night.

It gave Robertson her eighth career victory and her fifth win in the UFC. She has finished each and every one of her wins, and her victory over Casey carried extra significance as she surpassed UFC legend Ronda Rousey’s submission record.

🇨🇦 @Savage_UFC sinks in the RNC to get the finish! #UFCVegas3 pic.twitter.com/MV8trgQkdn

The first-ever UFC women’s champion had previously held the record for the most submission finishes in any women’s UFC weight class, with three, and was joined by former strawweight champion Rose Namajunas.

Then Robertson equaled that tally back in February 2019 with her rear-naked choke finish of Veronica Macedo in Prague, Czech Republic.

Robertson then picked up a TKO win over Sarah Frota before being stopped by rising flyweight star Maycee Barber last October.

But in Las Vegas on Saturday night, Robertson bounced back into the win column with a superb rear-naked choke finish as she forced the tap from Casey and broke Rousey’s record in the process.

Robertson is trained by former UFC fighter Din Thomas, who recently left Florida’s American Top Team to run his own coaching operation, but the COVID-19 pandemic threw a spanner in the works of those plans.

Undeterred, Thomas converted his garage into a gym, and worked tirelessly with Robertson to get her ready for her fight at the UFC Apex on Saturday night.

That work paid off, with Robertson showing that she is one of the most dangerous submission threats in any women’s weight class – and, thanks to her win over Casey, she’s now the most prolific submission finisher in UFC women’s history.

Not bad for a woman who admits she’s an unlikely person to be a world-class UFC fighter.

“Honestly, for me, it’s just a sport to me. It’s like playing soccer, playing football. That’s just how I look at it,” she said before her fight at UFC 240 last year.

“I’m more in love with the mental side of jiu-jitsu than anything else. It’s not like I want to hurt people. I’ve never been in a street fight.

“I’m probably the least aggressive person I know! But when I go in the cage… that’s how I got the nickname!” 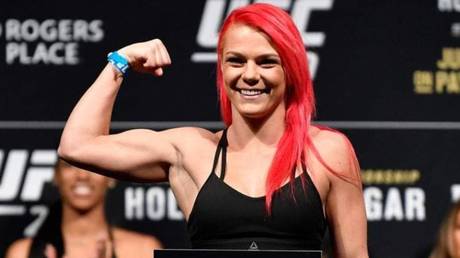