The back and forth between Borussia Dortmund and Manchester United over the transfer of English star Jadon Sancho seems to be at an end after Dortmund’s CEO drew a firm line under the failed negotiations between the two clubs.

Speaking to reporters ahead of the weekend, Hans-Joachim Watzke laid out his club’s position regarding transfers during the summer break, saying there would be no big-name arrivals. But, more significantly, he also made clear that Sancho would not be leaving the club.

England international Sancho has developed into a key player for Dortmund, and scored 17 goals last season, as well as contributing 16 assists. His performances have seen him linked with a move away from the Bundesliga side, with Manchester United the highest-profile of his suitors.

But, despite attempts to broker a deal, the move has fallen through, with first Sporting Director Michael Zorc, and now Watzke stating that Sancho will remain a Dortmund player.

“Sancho staying is set in stone. We will not discuss the details,” Watzke said.

“What I can say is if Zorc, who is a Westphalian like me, talks about a definite decision, then it’s definite. There is no room for interpretation.”

The decision to keep Sancho will also balance out the club’s position regarding incoming transfers, with the young England star’s stay at Dortmund reducing the need for the club to dive into the transfer market.

And Watzke said there won’t be any more major arrivals as the club keeps a careful watch on their finances during the COVID-19 pandemic.

“It’s a fact that there is no more money left for transfers,” he said. 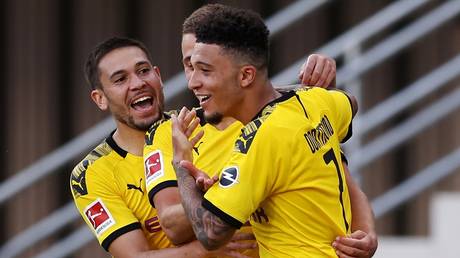