Barcelona boss Ronald Koeman has reportedly told Luis Suarez he can leave the club, although the step is likely to further anger striker partner and friend Lionel Messi, who is seriously contemplating his own Nou Camp future.

New Barca manager Koeman told Suarez, 33, that he was free to look for other clubs during a phone conversation on Monday, according to reports in Spain.

The move comes amid a mass clearout at the Catalan giants following a disastrous season in which they relinquished the La Liga title to Real Madrid before suffering a humiliating 8-2 Champions League quarterfinal defeat at the hands of Bayern Munich.

Coach Quique Setien has already paid for the disaster with his job, being replaced by Dutchman Koeman, while sporting director Eric Abidal has also left his position.

Uruguayan veteran Suarez, who has been at Barca since arriving from Liverpool for around €82 million ($97 million) in 2014, is under contract until 2021 but was told he is not part of Koeman’s plans in a call on Monday.

The striker is the third-highest-paid player at the Nou Camp, taking home €24 million a year, and is said to want the amount paid up in full should he see his contract terminated early.

Suarez is also reported to have been angered by his name appearing in the press as part of Barca’s summer exodus of players before he had heard anything formally from club officials.

Suarez has bagged 198 goals in 283 appearances for the club – helping them to four La Liga crowns and one Champions League title – and the news of his seemingly impending departure is unlikely to go down well with Messi, who himself is seriously contemplating a Nou Camp exit.

At an emergency meeting with Koeman last week, Messi is said to have told the Dutchman that he feels “more out of the club than in it.”

The Argentine star and Suarez are close friends and their families regularly holiday together. On the pitch their partnership has produced diminishing returns in recent seasons, although Suarez still managed 21 goals and 12 assists in 36 games in the last campaign.

Many Barcelona fans were angered by the step to dump Suarez, seeing it as an unsavory end to a man who has served the club so well. Others defended the step, pointing to the evident need for a Nou Camp overhaul.

Treating players with respect is not hard FCB.

Get your shit together.

Disgusting. Contract termination? Really Suarez that’s how you want to go and really Barça that’s how we treat our legends? 😖

People complain too much, man. This is exactly what we need from the manager, someone who has the balls to show these players the door.

We gave Suarez a chance to leave in good terms but he refused, so we have no choice but to terminate his contract. Ruthless but necessary.

Suarez has already been linked to a host of other clubs including Juventus and former team Ajax, as well as David Beckham’s Inter Miami franchise in the US.

Should, as expected, the Uruguayan star leave the Nou Camp this summer, he is unlikely to be the only big-name casualty.

The biggest question of all, though, remains whether Messi will follow him. 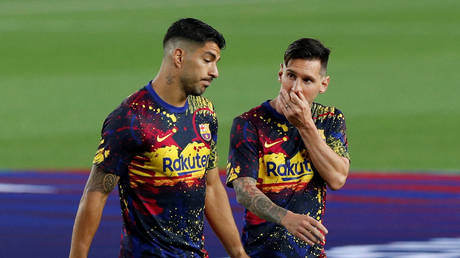