Nikita Kucherov finished as playoff top scorer as he helped Tampa Bay Lightning claim the Stanley Cup for the second time in their history on Monday with a 2-0 win over Dallas Stars.

The Russian provided an assist for Brayden Point’s first-period goal at Rogers Place in Edmonton, Canada as Tampa took an unassailable 4-2 lead in the series.

What else can you really say at this point? Unreal. pic.twitter.com/1uIwX8Ikmv

The assist took his tally to 27, the highest since Mario Lemieux managed 28 in 1991.

Most assists in a playoff year, NHL history:

Combined with his seven goals, the 27-year-old accrued 34 points overall, putting him one clear of teammate Point.

Blake Coleman made it 2-0 in the second period.

Kucherov was ecstatic after the final whistle, while goaltender Andrei Vasilevskiy shared a photo celebrating the Lightning’s victory alongside compatriots Kucherov, Mikhail Sergachev and Alexander Volkov on Instagram.

In recording his first shutout of the playoff year during the game and having featured in every match for Tampa, Vasilevskiy also sealed his place in NHL history.

Andrei Vasilevskiy of the @TBLightning is the second goaltender in NHL history to record his first shutout in a playoff year during the #StanleyCup-clinching game, joining Tom Barrasso in 1991 (w/ PIT).#NHLStats: https://t.co/oTGhm6xJqm pic.twitter.com/w1KDkpRmmr

Andrei Vasilevskiy, who set an NHL record for minutes played by a goaltender in a postseason (1,708:12), became the 10th different netminder in the League’s expansion era to appear in every game for the #StanleyCup champion. #NHLStats pic.twitter.com/QUwHfoUW7p

Tampa quickly put the cup to good use when they hit the locker room after the game. 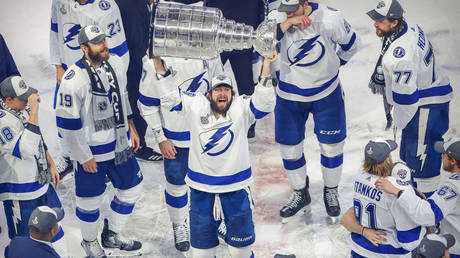 Don’t drag China into US internal...