The Tomsk native managed to lift the weight 76 times beating the previous achievement set by Greg Wittstock by 14 repetitions.

“I came across the official Guinness world record a couple of years ago after seeing a man lifting a barbell underwater. Then I thought that I had enough skills to do that myself. I have experience of winning bench press competitions, I won the European Russian-style bench press tournament. And I’m an amateur free diver. So I applied to set a new record,” Vivchar said.

The athlete needed two months to get ready for the record-breaking attempt which was registered on August 13 at the Lebyazhye Lake near Tomsk.

Vivchar said he managed to hold his breath for more than three minutes while he in training for the record attempt.

“I was really anxious because the water became cold and muddy due to bad weather. Moreover I was really nervous before my performance. My pulse rate was more than 108 beats per minute! It took me a long time to calm down,” the athlete added.

The record was officially recognized by independent observers who witnessed Vivchar’s outstanding attempt. 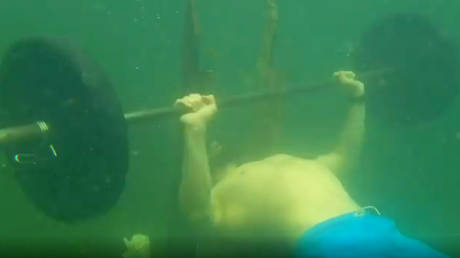