Reigning world pole vault champion Anzhelika Sidorova has suggested she could compete for another country if the controversy surrounding the Russian Athletics Federation remains unresolved.

Sidorova and her teammates are currently not eligible to take part in international events even under a neutral flag, after World Athletics suspended the process of granting neutral status in the wake of the Daniil Lysenko doping row.

“I cannot say I’m considering the possibility of performing for another country, but I cannot reject it, because the situation is more than complicated,” Sidorova said.

“Four years ago I couldn’t even have imagined that I would think about it. Back then I was categorically against changing citizenship. Now, I’m considering that option, but this is the last item on my list of plans, and I do hope I won’t be forced to do it.”

The Russian Athletics Federation (RUSAF) has been suspended by World Athletics since 2015 for alleged doping manipulations.

The situation recently worsened when the athletics governing body tightened its sanctions against Russia, prohibiting national team members from competing even under neutral status.

The new management of the Russian Athletics Federation (RUSAF) accepted guilt, firing all the coaches and officials involved in the Lysenko row.

In order to be reinstated, RUSAF was obliged to pay a $5 million fine and additional costs to World Athletics before July 1 for manipulation and document falsification in connection with the Lysenko case.

However, the fine was not paid on time, with Russian athletics officials saying the federation does not possess enough funds to make the payment.

The missed deadline could potentially lead to Russia’s expulsion from World Athletics. The body said it will deliver its verdict on Russia’s potential ban at the end of July. 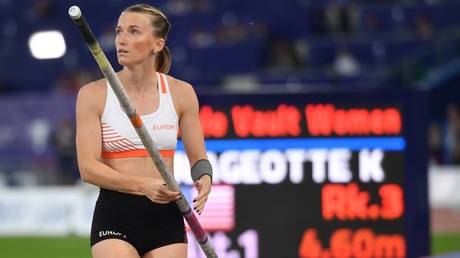