It has been a long time coming for Maxim ‘Maximus’ Grishin but the Russian fighter, who has been defeated just once in his last 21 bouts, will make his debut octagon appearance on the UFC’s ‘Fight Island’ later this month.

The 36-year-old Grishin boasts an impressive career ledger of 30-7 (with two draws) but his recent efficacy in the cage stands even further out when you consider that his early career, which began in 2008, opened with a record of 4-4.

Since that point, ‘Maximus’ has gone on the type of run rarely seen in Russian heavyweights not named ‘Fedor’. Indeed, since 2012 only Magomed Ankalaev has been able to claim victory against Grishin – a win which in part earned Ankalaev’s own path to the UFC where he has now won his last four fights on the trot.

In his recent run with the Professional Fighter’s League (formerly World Series of Fighting), Grishin went undefeated through six fights to land on the radar of UFC matchmakers who have reportedly pulled the trigger in offering him a deal for his debut in a heavyweight showdown in Abu Dhabi.

Grishin will be hoping for a similar impact against another of European MMA’s standout heavyweights in Marcin Tybura at UFC 251 on July 11.

The Polish fighter beat Moldova’s Sergey Spivak in his last outing in February, putting a cap on a patchy run of form which saw his status with the organization in doubt as he lost 4 of 5 fights.

Tybura had previously been linked with undefeated Moldovan heavyweight Alexander Romanov at the event.

UFC 251 will also feature Russian standout Petr Yan who will take on Jose Aldo for the vacant 135lbs title. 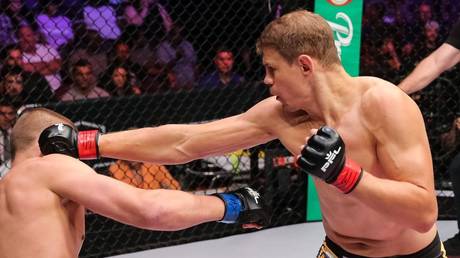