Russian MMA veteran Sergey Kharitonov will require hospital surgery after he was set upon by UFC fighter Adam Yandiev in a vicious attack in Moscow reportedly stemming from a row over a $25,000 debt.

Bellator MMA brawler Kharitonov, who last weekend knocked out England’s Oli Thompson in the first round of their Parus Fight Championship contest in Dubai, was on the receiving end of a brutal assault by middleweight fighter Yandiev on the sidelines of the ‘Battle of Champions’ combat sports event at Moscow’s Luzhniki sports complex on Friday night.

In a dispute which is said to have stemmed from Yandiev being reminded of a 2 million ruble debt to Kharitonov, footage showed the pair leaving the arena and entering a cloakroom area, where a casually-dressed Kharitonov first placed his hands in his pockets, seemingly unaware of the impending assault from a suited Yandiev.

After squaring up to his fellow MMA fighter, Yandiev landed two rapid-quick blows on Kharitonov, sending him stumbling backwards.

The 250lbs giant managed to regain his composure, grappling with Yandiev as the pair tumbled to the ground, where Yandiev rained down more punches from on top of his rival.

Separate footage showed the pair continuing the struggle as the police stepped in, with the 32-year-old Yandiev removing his jacket and appearing to roll up his sleeves as a bloodied Kharitonov was escorted safely away.

The altercation followed an earlier attack in which Yandiev had set upon businessman and amateur MMA fighter Ruslan Abdo, a 41-year-old friend of Kharitonov, breaking his nose in an assault also captured on camera.

Abdo alleged to Russian news outlets that Yandiev had used a knuckleduster in his attack on Moscow fighter Kharitonov, although those claims have not been verified.

Reports state that Ingushetia-born Yandiev erupted when he was reminded of a debt to Kharitonov amounting to 2 million-rubles ($25,000).

All three of Kharitonov, Abdo and Yandiev reportedly required hospital treatment, with the latter being detained by police.

Kharitonov will stay in care for at least 10 days, requiring surgery after suffering cuts, a broken nose and concussion, according to his lawyer.

Kharitonov, who according to TASS still has a contract with Bellator MMA, is one of the best-known and most colorful combat sports characters in his homeland. A veteran of more than 40 professional MMA contests, he has 32 victories in promotions including Bellator, M-1, Strikeforce and K-1.

Kharitonov made his boxing debut in September, walking to the ring with a bear before knocking out 47-year-old British veteran Danny Williams. Kharitonov has also made the headlines for calling out Mike Tyson as well as for some outlandish statements on the coronavirus pandemic.

Former M-1 fighter Yandiev, nicknamed ‘Beard’, is 9-1 in his professional MMA career – his sole defeat coming in his one and only UFC octagon appearance so far, against Jordan Johnson in Moscow back in September of 2018 when he was submitted in the second round. 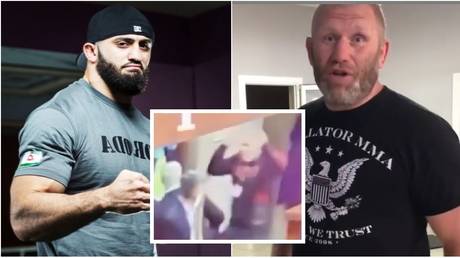