Bellator MMA veteran Sergey Kharitonov has been discharged from a Moscow hospital 10 days after he was brutally set upon by UFC fighter Adam Yandiev, against whom Kharitonov has reportedly now filed a fraud claim.

Heavyweight fighter Kharitonov was attacked by Yandiev on the sidelines of a combat sports event at the Luzhniki complex in the Russian capital earlier this month, in a row said to have stemmed from an unpaid debt by Ingushetia-born middleweight Yandiev.

Kharitonov, 40, was hospitalized with concussion, a broken nose and a fractured orbital bone around his right eye – which he claimed was the result of Yandiev using a knuckleduster in the attack.

The 32-year-old Yandiev has denied those allegations, but is now facing a fraud claim from Kharitonov to add to the charges of hooliganism by means of “deliberate infliction of minor harm with the use of objects as weapons.”

According to Telegram channel Baza, Kharitonov has accused Yandiev of defrauding him to the tune of more than 1 million rubles ($13,000) by not returning money allegedly lent to him.

Kharitonov was discharged from hospital on Monday, TASS reported, but is expected to be sidelined from action for several months.

Yandiev, who is known by the fighting moniker ‘Boroda’ (Beard), was detained for 48 hours after the altercation, in which he was also seen attacking Kharitonov’s friend, Russian businessman and amateur MMA fighter Ruslan Abdo.

Yandiev – who boasts a 9-1 record in MMA, and whose only defeat came in his sole UFC appearance to date, against Jordan Johnson in Moscow in September 2018 – has said he is willing to answer before the law for his actions, but disputes Kharitonov’s version of events and the claims of unpaid debts.

Kharitonov is one of Russia’s best-known MMA faces, and has competed in promotions including Bellator, Strikeforce, M-1 and Pride. He owns a pro MMA record of 31 wins and 7 losses, with two no contests, and made his boxing debut in Russia earlier this year, stopping 47-year-old British veteran Danny Williams in the second round of their fight just outside Moscow.

A week before he was attacked by Yandiev, Kharitonov had knocked out England’s Oli Thompson in the first round of their Parus Fight Championship MMA contest in Dubai. 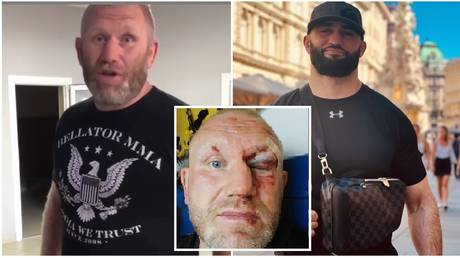