Two returning champs had heavyweight homecomings as they set foot in Russia again for the first time since title triumphs, with footage capturing the remarkable scenes as crowds and choirs met Vadim Nemkov and Alexander Povetkin.

As the doors opened to allow Povetkin out of customs at Moscow’s Sheremetyevo airport, a Cossack choir in full uniform sang the new WBC interim champion’s praises in stirring style.

Povetkin stood center stage as the singers and musicians gave him a knockout welcome by forming a circle to serenade the 40-year-old, who crushed contender Dillian Whyte with a stunning fifth-round uppercut in a back-from-the-brink upset in the UK on Saturday.

Members of the choir draped the hard-hitting Povetkin in a traditional robe and hat before performing the song ‘Lyubo, brothers, lyubo’ in honor of the fighter known as the ‘Russian Knight.’

For those who don’t speak Russian he was thanking Sasha for the fact that we don’t have to hear about Dillian Whyte being the WBC mandatory any longer.

The former Olympic Games gold medalist looked as cool as he did when he poleaxed Whyte after twice climbing from the canvas in the previous round, rolling with the punches after his long flight before posing with his symphonic supporters.

“For those who don’t speak Russian, [they were] thanking Sasha for the fact that we don’t have to hear about Dillian Whyte being the WBC mandatory any longer,” joked one British fan, referring to his beaten rival’s pre-fight ambitions to challenge Tyson Fury or Anthony Joshua after beating Povetkin.

There were more raucous but no less joyous scenes in Belgorod, where relative newcomer Nemkov stepped out with his title to be greeted by a mob of fans who had taken over a street to show their adulation for the new Bellator light heavyweight king.

Nemkov’s victory in Connecticut was every bit as impressive as Povetkin’s, demolishing two-division champion Ryan Bader with a devastating head kick and a barrage of strikes in the second round.

An announcer hollered Nemkov’s name through a public address system and the new champion later pictured himself with Fedor Emelianenko, his mentor who had been dethroned by Bader inside a round at Bellator 214 in California in January 2019.

Speaking after he became the first Russian to claim the light heavyweight title, Nemkov had said: “I just can’t wait to get home. I want to see my family, my kids.

“I’ve been in camp forever. They let me do my thing and didn’t bother me much.

“I miss them a lot. I want to see my friends and the rest of my family. We’re going to celebrate my victory.”

Former champion Jon Jones, who vacated the belt last week but remains the top-ranked fighter in the division, was among those to publicly recognize Nemkov’s achievement. 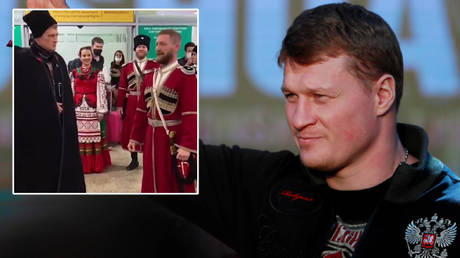