A new US law aimed at prosecuting doping offenders at international sporting events could be used to kidnap athletes and take them to the US illegally, Russia’s foreign minister has warned.

The law, which empowers officials to pursue fines of up to $1 million, jail terms of up to 10 years and restitution to victims, was described by the World Anti-Doping Agency (WADA) as “unilaterally exerting US criminal jurisdiction over all global doping activity”.

WADA warned that the legislation “will likely undermine clean sport by jeopardizing critical partnerships and co-operation between nations”, yet it was adopted by the US congress in a move that Russian sports minister Oleg Matystin called a sign of the country “taking upon itself the right to be a judge.”

Matystin told a Russian sports channel at the time that leaders were about to “think how to minimize the risks for Russian athletes” – and foreign minister Sergei Lavrov has now elaborated on the government’s concerns and plans to oppose the legislation, which has not been well received by the global sports community.

“I do not exclude that, just as the Americans kidnap those whom they suspect of something around the world and simply take them to their territory illegally, similar methods will be used to punish athletes who have passed a positive test whom the Americans consider a threat to their interests in international competitions,” Lavrov told a meeting with representatives of the sports community of the Sverdlovsk region, according to RIA.

“We are taking all the necessary measures in the international arena to provide diplomatic and legal support to Russian athletes, coaches – everyone involved in the preparation of our national teams.

💬 #Zakharova: Right-minded people around the world consider the Rodchenkov Act to be politically motivated, because the extraterritorial use of #US legislation could undermine the world’s anti-doping system. pic.twitter.com/ZftIjefOkB

“We are trying to stop any arbitrariness in relation to our athletes, including from decisions that are trying to impose around the world far beyond national jurisdictions.”

The act is named after Grigory Rodchenkov, the former head of Russia’s main doping control laboratory in Moscow who alleged that a widespread state-run secret campaign was providing athletes with doping and hiding their test results from international inspectors. Russia denied that there ever was such a state-sponsored campaign.

Rodchenkov fled to the US in 2016 and was later charged with running an illegal doping scheme by Russian officials, and his allegations led to Russian athletes being banned from several major international sporting events.

In a statement at the time of the act being signed, WADA said: “No nation has ever before asserted criminal jurisdiction over doping offences that occurred outside its national borders – and for good reason.”

On the eve of #TokyoOlympics, I held a hearing about the importance of the Rodchenkov Act, a bipartisan criminal statute to allow law enforcement to dismantle these corrupt networks, for victims of doping fraud.

Let’s promote a fair an even playing field for all athletes.

Ridiculous. Establishing an american world police against #doping, excluding it’s own territory and it’s major leagues. However, for this kind of double standard the name “Rodchenkov act” is well chosen. https://t.co/az37sc77HU

Speaking in February, United States Anti-Doping Agency boss Travis Tygart said that those engaging in doping could expect the same harsh treatment handed to football officials involved in the FIFA money laundering and bribery scandal, which resulted in dozens of individuals being removed from their posts, fined or imprisoned from 2015 onwards.

“I think it is going to be a game-changer both for athletes, for fans and sponsors,” he predicted ahead of this summer’s Olympics.

“Hopefully, sponsors will finally get the return on their investments – the value [for] what they are paying when it comes time to broadcast. 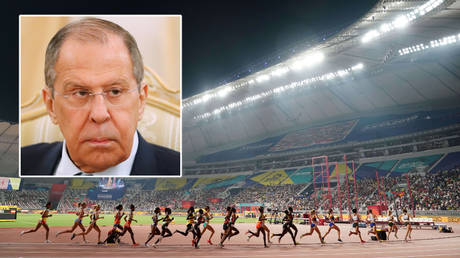 ‘Wilder got robbed of a KO’: Boxing fans accuse referee of ‘crazy slow’ count after Fury was dropped