Unbeaten MMA fighter Dmitriy Sosnovskiy has reportedly landed eight-and-a-half years in a maximum security penal colony after being found guilty of forming part of a gang who are said to have kidnapped and choked a businessman.

Heavyweight Sosnovskiy, 31, was one of five men named in a statement by the Moscow prosecutor’s office reported by R-Sport, which said that the one-time UFC star had been part of a gang who pushed the man into a car, took him to an office and threatened to murder him.

The criminals have reportedly been given between four and nine-and-a-half years behind bars, with two allowed to serve in a general regime penal colony.

“Having received a refusal from the abducted man to fulfill their illegal demands, one of the accused grabbed the victim’s neck with his hands – blocking his access to oxygen, which made him lose consciousness,” the prosecutor’s office is said to have concluded in the release.

The businessman reportedly escaped and went to the police when the accomplices left the office.

The account said that the dispute centered on a sum of around $3,800 which the gang believed was due to them.

Fighting out of Moscow, Sosnovskiy made his UFC debut on a Fight Night card in London in March 2018, earning a second-round submission win over Mark Godbeer.

That was the 11th victory of a perfect career for the ‘Wicked Machine’, who had also ended his previous four fights before their scheduled end.

The Ukraine-born powerhouse recorded arguably his most notable win when he beat Russian great Alexander Emelianenko in St Petersburg in 2014, although Emelianenko was about to spend more than three years out of action due to a range of personal issues.

Speaking after Sosnovskiy was initially arrested in 2019, the fighter’s lawyer, Ravil Saberov, said he had seen video footage of the incident concerned.

”It happened in an office,” the attorney told Bloody Elbow. “What we can talk about is maximum arbitrariness.

“The complainant was not prevented from leaving; he left the office by himself and he came to receive his salary the next day.”

Refusing to comment at the time, Sosnovskiy’s training partner and fellow UFC heavyweight, Alexey Oleinik, described himself as “frustrated” and “disappointed that such a situation has occurred.”

“I hope and think that they were in the wrong place and at the wrong time with the wrong company,” he said.

“Sosnovskiy is a well-known person, so they immediately talk about him.”

The report on the verdict added that it is yet to enter into legal force. 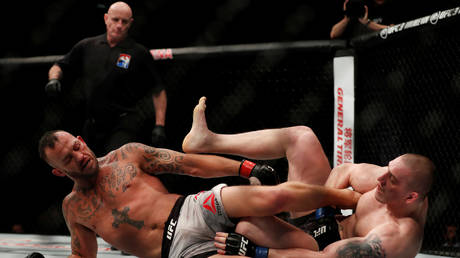