Former light heavyweight boxing king Sergey Kovalev, who is due to return after more than a year out of the ring later this month, has tested positive for synthetic testosterone, according to leading boxing writer Dan Rafael.

Oracular reporter Rafael broke the news to his Twitter following of 236,000 on Thursday afternoon – exactly two weeks before Kovalev was scheduled to face Uzbekistan-born Bektemir Melikuziev at Moscow’s Luzhniki Stadium.

Should Rafael’s report prove true, that bout is almost certain not to go ahead and, at 37, Kovalev’s career could even be in doubt.

BREAKING: Sergey Kovalev has tested positive for synthetic testosterone. I have obtained the VADA letter outlining the details of positive test. Means his Jan. 30 DAZN headliner with Bektemir “Bek Bully” Melikuziev likely will be canceled. #boxing

Deserves the best f-bomb gif out there pic.twitter.com/YVuMGlpVH7

“I have obtained the [anti-doping agency] VADA letter outlining the details of the positive test. Means his Jan. 30 DAZN headliner with [Melikuziev] likely will be canceled.”

Fans reacted with frustration to the prospect of Kovalev’s return to action for the first time since his knockout defeat to Canelo Alvarez being called off.

The Russian had been due to face Sullivan Barrera in April before that bout was called off as a result of the Covid-19 pandemic.

Kovalev had only suffered three defeats in his formidable 38-fight career before he encountered Canelo, two of which came against revered former champion Andre Ward.

“Krusher” was in the headlines in October when he pleaded guilty to a misdemeanor charge shortly before a felony assault trial involving a woman who had her nose broken in California was due to begin.

He was sentenced to three years’ probation, as well as being required to complete an anger management course and pay court costs. 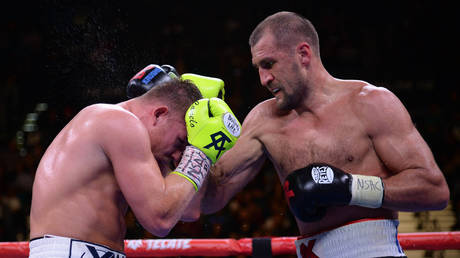 Elon Musk is turning oil rigs into floating SPACEPORTS for ‘journeys to Moon, Mars and hypersonic trips around Earth’