Sergey Kovalev has pleaded guilty to a misdemeanor in a case against a woman who said the former light heavyweight champion had left her needing a plate in her neck, reportedly cutting a deal with prosecutors to avoid a jail term.

The former Ring Fighter of the Year has admitted his guilt after being accused of punching a woman and assaulting her dog after she turned down his sexual advances following their initial meeting at an opening party for a boxing gym.

Jamie Frontz claimed that the alleged attack, which took place in California in 2018, had left her needing a metal plate and four screws to be inserted into her neck to repair the damage caused by the enraged boxer.

Kovalev had faced years behind bars on a felony charge but has now received three years’ probation in return for accepting a misdemeanor charge relating to fighting, noise and offensive words, according to TMZ.

The veteran was ordered to complete an anger management program and pay $220 in court fees, although he could ultimately pay a huge sum to Frontz, who is believed to still be pursuing $650,000 from him in a civil action.

She told the US outlet that the 37-year-old had paid her $250,000 so far, having reduced her initial demand from $8 million in compensation for injuries that she said required four surgeries.

“When he punched me, my nose exploded,” she revealed in her initial description of the altercation. “Blood went everywhere.

In February, Kovalev was arrested on charges of DUI in Los Angeles after reportedly being pulled over by California Highway Patrol.

He was arrested at around 2am local time and taken to a nearby police station where he spent five hours in custody as he was booked with driving under the influence of alcohol.

The Russian fought three times in 2019 but has been out of action since losing his WBO title to Canelo Alvarez in Las Vegas in November.

TMZ said it had not received a response to a request for comment from Kovalev’s attorney. 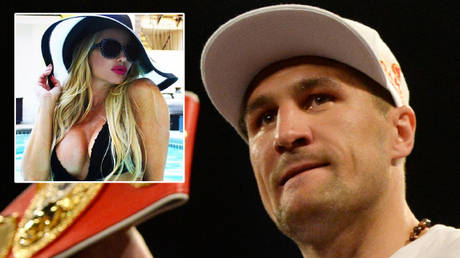