Russia boss Stanislav Cherchesov’s son, who takes his father’s name and is also a goalkeeper, has been taken to hospital in an ambulance after being left unconscious when he took an opposition player’s knee to the head in a match.

Cherchesov junior was playing for FC Olimp-Dolgoprudny, a Russian Professional League group two side, when he advanced from his line in a bid to thwart an opposition Rodina player who was rushing towards goal.

The match was stopped for several minutes after the 25-year-old was hit in the head by the player’s knee with 26 minutes played, requiring medical staff to bring him back to consciousness before he was stretchered to an ambulance by the side of the pitch.

Cherchesov was said to have been awake again on his way to Dolgoprudny Central City Hospital, where he was pictured raising his thumbs to the camera as he was given an MRI scan in full kit.

The club announced that their unfortunate keeper had suffered concussion, suspected closed craniocerebral trauma and a fracture of the lower jaw in the ugly incident.

Writing on social media, they had earlier said: “Injuries are part of football. We wish our goalkeeper a speedy return to the field.

“Stanislav Cherchesov feels well and is already undergoing an examination.”

Perhaps unsettled by the troubling injury to their number one, Dolgoprudny conceded the first goal of the match just two minutes after Cherchesov’s premature departure.

They remained a goal down until the 75th minute but scored twice in the closing stages to stay top of the table and give Cherchesov a boost in his recovery.

An admirer of legendary Russia goalkeeper Lev Yashin, Chercheshov was born in Dresden and started playing in goal as a five-year-old in Austria, where his father, who made 39 appearances for Russia, coached Kufstein and Wacker Tirol.

He moved to Russia in 2013 and signed for Dinamo Moscow during his dad’s brief spell in charge of the club between 2014 and 2015, going on to represent Chornomorets, Baltika and Olimp (Khimki).

Despite watching him save three penalties in a Russian Cup match earlier this season, veteran Dolgoprudny manager Rinat Bilyaletdinov said that he would continue to rotate Cherchesov and his other two goalkeepers.

Cherchesov’s father spent most of his playing career at Spartak Moscow, making more than 150 appearances for the Russian giants as he won the Soviet Top League and Russian Premier League twice each. 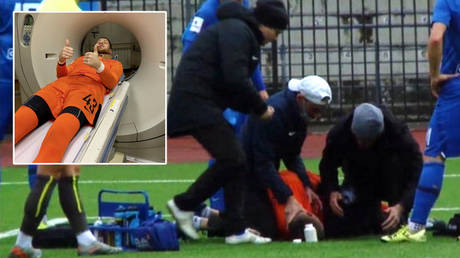