Inspired by a fantastic Robin Gosens, Germany beat holders Portugal 4-2 in their Euro 2020 meeting at Munich’s Allianz Arena. With their first win of the tournament, the Germans head up to second in Group F behind France.

Both teams were unchanged from their first matches, but found themselves in contrasting moments in the competition.

While Germany still sought their maiden points and would probably be knocked out if tasting defeat, a 3-0 win over Hungary meant Portugal could draw their next two games including this one after France and Hungary battled to a 1-1 stalemate earlier today.

Germany unchanged. Strap in for this one 🇵🇹🇩🇪#POR #GER #EURO2020 pic.twitter.com/J9OvRZWYU3

The Germans started lively with Toni Kroos typically spreading the ball around and Thomas Muller getting stuck in.

Within five minutes, they thought they had already gone one up when Gosens smashed home with an acrobatic half volley, only for the goal to be ruled out as Serge Gnabry was offside.

On their next move of note, Rui Patricio parried out a dangerous left-footed shot from Champions League final-winner scoring Kai Havertz, and Gnabry could have easily thrown himself over the ‘keeper to claim a penalty if he wished.

Soaking up 15 minutes of German pressure, Portugal, who had been playing a 4-5-1 out of possession, finally hit on the counter and scored with their first chance.

Who else would it be?

Netting for the first time against the four-time World Cup winners, Cristiano Ronaldo notched his third of the tournament with a simple tap-in after Diogo Jota had taken Manuel Neuer out of the game when picking up an excellent Bernardo Silva long ball.

Coming into his own, he then performed a ridiculous flick and no-look backheel that made a mockery of Toni Rudiger.

His strike had knocked Germany off-kilter, as they struggled to come back into the match after having been so upbeat before Ronaldo’s punch to the kidneys.

Rudiger’s half time talk is going to be “Let’s get the result, so no one remembers Ronaldo did this to me” pic.twitter.com/eVRAQGnxe6

Then, as the game got scrappy while a series of fouls were given against either team and free kicks were awarded, Gosen’s volleying once more came to the fore.

He smashed Joshua Kimmich’s ball across the box, with Havertz getting the better of a Manchester City player yet again when appearing to convert the knock past Patricio.

Upon further inspection, however, it became clear that Premier League star Ruben Dias bagged an own goal.

Minutes later, the comeback was complete when another own goal gave the hosts the lead.

VAR checked for offside, but it was found that there was nothing wrong when Borrusia Dortmund’s Raphael Gurreiro got on the end of Kimmich’s cross.

In the record books for all the wrong reasons, this marked the first occurrence of any team putting two into their own net in competition history.

Portugal become the first team ever to score two own goals in the same game in the European Championships.

Gnabry twisting and turning on the edge of the box, his shot was kept out by Patricio which saved Silva’s blushes after a schoolboy error approaching half time.

Already dubbed the game of the tournament so far, its first portion came to an end with the Germans leading and now off rock bottom in the group.

Coming out for the second half, Renato Sanches was brought on for Silva for the Portuguese.

Germany looked happy to protect their lead, but in a matter of minutes went 3-1 up when Gosens instead tried a low driven ball across to an influential Havertz to guide over the line.

As Pepe and his manager Fernando Santos could be seen arguing, the latter substituted William Carvalho for Rafa Silva with around half an hour to spare.

Finally getting his reward, Gosens headed home a Kimmich cross to make it 4-1 and possibly put the tie beyond any doubt on 61 minutes before being brought off to a standing ovation.

It was a double sub from Joachim Low that involved Emre Can and Marcel Halstenberg entering for Mats Hummels and Gosens respectively.

And after Joao Moutinho came on for Bruno Fernandes, Portugal gave themselves a fighting chance when Jota met a Cristiano Ronaldo effort that lobbed Rudiger and Neuer on the line.

Havertz for Leon Goretzka and Ilkay Gundogan for Niklas Sule was Low’s next double switch, but it was first substitute Sanches that nearly made the biggest impact of the lot of them when hitting the woodwork from long range with 11 minutes to spare.

Goretzka went for glory with a distant effort of its own that flew over on a German break, as Andre Silva replaced Jota, and Leroy Sane for Gnabry was Low’s last change.

Pepe threatened to get on the scoresheet when popping up at the back post as Portugual went for broke, but he couldn’t keep his header down.

Through four minutes of added time, Germany weathered the storm and pulled off what was an impressive win in all.

Now second in the so-called Group of Death, their attention turns to Hungary on Wednesday while Portugal meet France.

Interviewed post-match, Sanches said: “Of course it was 4-2, but we also had chances to score, just like them.

“It was a game between two great teams. The result speaks for itself but I think we had opportunities to reduce the result.”

“Regardless of whether I start playing or not, I always do my best. Of course all players want to play, but we have to respect decisions.”

Renato Sanchez with the woodwork 👀
pic.twitter.com/p0iGthDCTu

“Sometimes we couldn’t fight the supremacy of Germany but we have to take the positive things out of this game.”

“Germany have a great team, many good players who played between the lines. We couldn’t get out of the pressure but we improved. We made it 4-2 and still got a ball against the post. But we have to keep working.”

“They managed to have a lot of possession and play in our midfield. In the second half we reacted, but it was not enough.”

Not starting Renato Sanches after his impact vs Hungary was criminal from Fernando Santos. That safety first double pivot of William Carvalho & Danilo Pereira didn’t even help Portugal defensively. And Sanches again excelled when he came on.

“We started well, with good game organisation, looking to attack, getting some connections. We made good use of a counterattack move, which was one of the moments when we knew they would struggle,” said losing coach Santos.

“Germany were better but we had a foothold in the game. We had a second chance on a counterattack that could have been a goal and it could have turned out differently.”

“At half-time I tried to change it, but we ended up conceding the third and fourth goals. This shook the team, which still tried to react.

“We reduced it to 4-2, we had a ball against the post, one or two chances, but Germany also created danger. It was a fair victory for Germany.”

We will have to look at this game and now what we have to do is clear our heads as we have a very important game against France,” 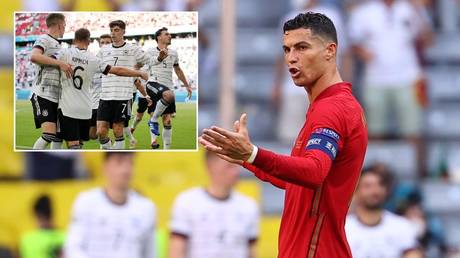