New Juventus manager Andrea Pirlo has set out his plans for Cristiano Ronaldo and Co. as Juventus returned to training, also revealing that there was no longer room for forward Gonzalo Higuain in Turin.

Pirlo was the surprise appointment to take over from the sacked Maurizio Sarri after Juventus clinched a ninth successive Scudetto last season but again fell well short in Europe.

The Italian World Cup winner – who was handed the job despite having no managerial experience – took training for the first time this week as the Juventus first team returned from their summer break.

Speaking on the role at a press conference on Tuesday, Pirlo laid out his plans to revive the Old Lady into a force that can again challenge for a first Champions League title since 1996.

“I want to bring back the enthusiasm, propose a proactive football with mastery of the game,” the 41-year-old said, according to Football-Italia.

“I told the players two things: you always have to keep the ball and when you lose it, you must get it back quickly.”

“I’m convinced that I’m in the right place at the right time. Tactically we could play with four or three at the back, I have no set formations.”

Pirlo, who spent four years as a Juve player and was appointed under-23s manager at the club before being names first-team manager just one week later, said he instantly felt “at ease” on his return.

He also dismissed claims that Argentine forward Paulo Dybala could be set for an exit, as has been suggested in various reports this summer.

“Quality players can play together in any team, the important thing is that everyone is ready to sacrifice and willing to work for others… Dybala is an important player, he will be part of the project,” Pirlo said.

The Italian former midfield maestro has already shown his ruthless side, however, telling 32-year-old forward Higuain – who has been at the club since signing from Napoli for €90 million in 2016 – that his services were no longer required.

“We’ve decided together with Gonzalo Higuain that he’ll leave the club this summer. He’s out of the project and we’re ready to let him go,” said the new Juve boss.

Footage from training this week showed Pirlo in consultation with members of the Juve hierarchy with Ronaldo also close by.

Cristiano Ronaldo with Fabio Paratici, Nedved and the new coach Pirlo after the training session.

Rumors have suggested that the 35-year-old Portuguese star was so frustrated last season that he eyed a switch from the club he joined for €100 million in 2018, with Paris Saint-Germain supposedly among the preferred destinations.

READ MORE: Cristiano Ronaldo supposedly wants a move to PSG – but why on earth would they want him?

Those reports will now seem even more far-fetched after Ronaldo reported for training this week, with Pirlo saying he would further consult with his star man regarding plans for the coming season, which kicks off on September 18.

Pirlo: “Cristiano Ronaldo? We spoke before training, we will have time to talk more specifically about tactics…” 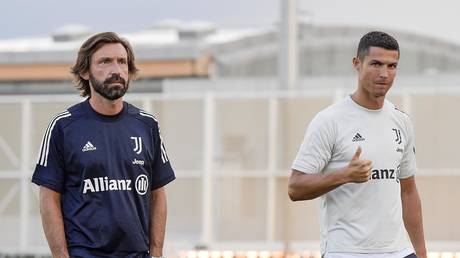 Talk to Alexa in the car with Echo...