Cristiano Ronaldo says he is returning to a club “that has always had a special place in my heart” after Manchester United completed the Portuguese star’s arrival back at Old Trafford.

United made a stunning swoop for the 36-year-old last week, announcing that Ronaldo would be coming back to the club where he became a superstar before leaving in 2009 to make more history at Real Madrid.

Despite having a year remaining on his deal at Italian giants Juventus, the disgruntled Portuguese icon engineered a move away from Turin this summer and had initially been linked to the likes of Real, PSG, and – unthinkably for United fans – a potential link-up with Pep Guardiola at Manchester City.

In the end, it was the Old Trafford club which captured the five-time Ballon d’Or winner, who is said to have completed his medical in Portugal on Monday.

After breaking the internet – including their own website – with their initial announcement last week, United confirmed the signing on Tuesday, including the news that CR7 would be joining on a two-year deal with the option of an extra year, which could mean he stays at United until he age of 39.

“Manchester United is delighted to confirm the signing of Cristiano Ronaldo on a two-year contract with the option to extend for a further year, subject to international clearance,” said the club, before reeling off Ronaldo’s remarkable list of accolades down the years – including his 118-goal haul during his initial spell at Old Trafford, where he won a hat-trick of Premier League titles, the Champions League, and his first Ballon d’Or.

A comment from Ronaldo himself followed, in which the prolific Portuguese said he had been “overwhelmed” by the reaction to his return.

“Manchester United is a club that has always had a special place in my heart, and I have been overwhelmed by all the messages I have received since the announcement on Friday,” read a statement on the club website.

“I cannot wait to play at Old Trafford in front of a full stadium and see all the fans again. I’m looking forward to joining up with the team after the international games, and I hope we have a very successful season ahead.”

Adding to the ecstasy was a statement from United manager Ole Gunnar Solskjaer – a man who appeared alongside Ronaldo during his own playing days at the club.

“You run out of words to describe Cristiano,” said the Norwegian.

“He is not only a marvellous player, but also a great human being. To have the desire and the ability to play at the top level for such a long period requires a very special person.

“I have no doubt that he will continue to impress us all and his experience will be so vital for the younger players in the squad. Ronaldo’s return demonstrates the unique appeal of this club and I am absolutely delighted he is coming home to where it all started.”

Around the same time as United issued their statement, former club Juventus bid ‘ciao’ to the departing star in a message of their own.

“On 10 July 2018, two icons of the European and football world came together – Cristiano Ronaldo became a Juventus player,” wrote the club.

“Today, after three years together and 133 appearances, 101 goals scored and five trophies won, that chapter has come to an end… The paths of CR7 and Juventus have gone their separate ways.

“On that day in July, when Cristiano arrived in Turin, the electric feeling of those great days could be felt through the air. The Juventus fans welcomed CR7 like a king, eager to see him on the pitch and cheer with him. It was a great story.”

After listing Ronaldo’s goalscoring accolades in a spell in which he won two Serie A titles and a Coppa Italia – but tellingly failed to help the club end their long wait for Champions League glory – the message added: “The unforgettable moments experienced together were many. We could recite them and relive them, but it would not help, because everyone has their own special memory linked to CR7.

“Everyone has a shared emotion that does not need to be dusted off, because everyone will always remember what they felt in walking this stretch of road together.”

Ronaldo will reportedly rocket straight to the top of the Premier League pay charts, netting an estimated £480,000-per-week at United, according to some reports.

The Portuguese ace is currently on international duty, but could make his much-awaited second United debut against Newcastle at Old Trafford on September 11. 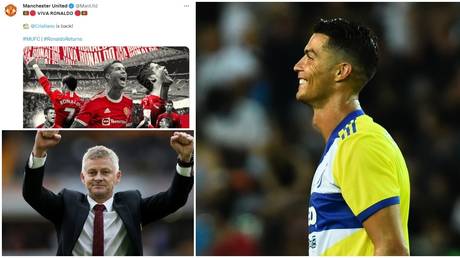 How to stop your iPhone apps from...