Manager Jose Mourinho has leaped to the defense of Harry Kane and his own track record with strikers through an impassioned rant, after both he and the Tottenham star were criticized at the weekend.

Following Friday night’s 1-1 draw with Manchester United, ex-Arsenal legend Paul Merson picked Kane and his boss out, then questioned whether the Portuguese could extract the best form from the 26-year-old.

“I think he’ll have a serious think at the end of the season, I really do. I don’t see him getting 25-30 goals next season with the way Jose will want to play,” claimed Merson on Sky Sports.

Never one to back down, Mourinho used the pre-match press conference ahead of his side’s clash with West Ham on Tuesday to fight his corner.

“I feel a bit strange about some analysis and some comments. The beginning of some comments and analysis started from Paul,” admitted Mourinho.

“I have to say I respect people a lot like him and because I respect him a lot I want to be nice in my answer. I try to be nice and I try just to say something where people can think a little a bit,” he went on, before diving into a four-minute, stat-filled diatribe.

First comparing the performances of Kane and his opposite number for Manchester United, Anthony Martial, in addition to highlighting the England skipper’s lack of playing time, Mourinho then rolled off a list of top marksmen he has overseen across the years.

🗣”I had a few who weren’t bad, I had a guy called Drogba he scored 186 goals, I had another guy who wasn’t bad, he’s at Juventus now”

Jose Mourinho has just read a list of strikers he has managed in his Harry Kane comparison after @PaulMerse said he didn’t suit his style 🤣 pic.twitter.com/HubZ3EROMN

“I can say that I had a few strikers that played for me and they are not bad. I had one guy called [Didier] Drogba. He played for me [for over] four seasons. He scored 186 goals, which gives an average of 46 goals per season,” said Mourinho, though his stats were slightly off in that the Ivorian actually notched 73 goals in 187 appearances on his watch.

Also mentioned were “one guy that is not also bad – he plays for Juventus now” – i.e. his compatriot Cristiano Ronaldo – plus Karim Benzema, 2010 Champions League winner Diego Milito and Zlatan Ibrahimovic.

“I have one guy that is not also bad. He plays for Juventus now. He played for me three seasons, he scored 168 goals, which gives an average of 56 goals per season,” the three-time Premier League winner added.

“I have another guy that is not also bad called Karim Benzema. He played for me three seasons, he was not always starting because he was quite young, but he scored for me 78 goals in three seasons, which gives a 26-goal average per season.

“I had another one called (Diego) Milito. He played one season for me, he scored 30 goals, he won three titles…

“I had another guy that plays for me one-a-half seasons, because in the other half he had a big injury. Tall guy called Zlatan. He scored 58 goals, which gives a 29 average per season.”

The Spurs tactician signed off by saying: “So, dear Paul, I have lots of respect for you. [But] I think Harry Kane has no problems at all to score goals in my teams.

“Especially when he is fit, fresh, when he has routines of playing. So, that is my message to somebody that I have lots of respect for.”

Mourinho and Tottenham host London rivals West Ham on Tuesday, knowing they are facing an uphill struggle to finish in the Champions League places.

After their draw against United, Spurs remain eighth in the Premier League table, nine points off the top four. 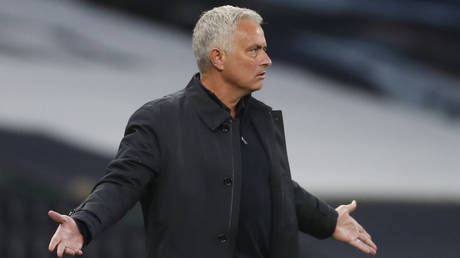