Cristiano Ronaldo spurned his first big opportunity to break the all-time international goalscoring record as he missed a first-half penalty against Ireland – but football fans accused him of aiming a PUNCH at a rival beforehand.

New Manchester United signing Ronaldo needs just one more goal on his tally to bypass Iran’s Ali Daei and become the all-time top scorer in international football with 110 strikes – and had a chance to do just that a quarter of an hour into Portugal’s World Cup Qualifier against the Republic of Ireland at the Estadio Algarve.

How is that a penalty 🤣 and they didn’t play it in fast motion and Ronaldo throw a punch and did not get sent off @FIFAWorldCup is corrupt pic.twitter.com/UF3vktbftA

But it was a contentious one. Ronaldo’s new teammate at Old Trafford, Bruno Fernandes, went down under a challenge from Ireland’s Jeff Hendrick in the box and despite those in green-tinted glasses suggesting Fernandes made the most of the challenge, the referee opted to point to the spot after prolonged debate with VAR.

And that’s where the fun started. With Ronaldo hovering around the penalty spot in anticipation of etching his name into the history books once again, Irish defender Dara O’Shea attempted a bit of gamesmanship and rolled the ball away from the penalty spot – prompting a furious reaction from Ronaldo as he lashed out at the Irishman with his arm, sending him tumbling to the turf.

Some claimed Ronaldo had got off lightly, despite the contact appearing minimal (if any).

If it was O’Shea swinging the thump at Ronaldo he would of been sent off pic.twitter.com/cdUWBv3aZa

Bruno Fernandes up to his old tricks again. But Ronaldo has to go for that punch. Is that not even going to be looked at? Because he’s Ronaldo?

“Ronaldo’s punch!” Lay off it Ronnie, he brushed him on the shoulder

Ireland will say that justice was done when 19-year-old Manchester City prospect Gavin Bazunu smartly dove to his left to paw away the spot-kick to the delight of Irish fans and, presumably, the Daei household.

To compound Ronaldo’s woes, Ireland took a shock lead on the stroke of half-time when John Egan glanced a brilliant header into the net from a corner, meaning a turn-up for the books seemed possible as the teams headed in for the break. 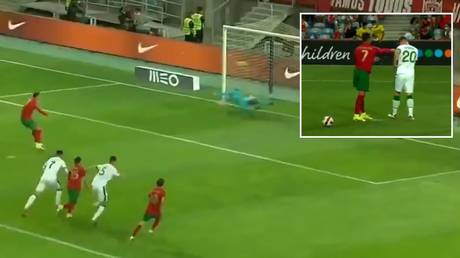