Brazilian legend Ronaldinho is finally a free man again after a Paraguayan court granted his release following a spell of more than five months in detention on charges of entering the country with fake documents.

Ronaldinho and his brother Roberto de Assis Moreira were released on Monday by a judge in Asuncion, having spent the past four months under house arrest at a hotel in the Paraguayan capital. Prior to that, the pair had spent a month in a maximum security prison on the outskirts of the city.

Dressed in a trademark beret, the 40-year-old former Barcelona and Paris Saint-Germain star appeared in court himself to accept the terms of his release.

The duo had faced up to five years in prison, although the authorities accepted that Ronaldinho had no part in the plan to manufacture the fake Paraguayan passports.

They did, however, believe that de Assis Moreira was aware that the documents were false.

“There is no indication that [Ronaldinho] has any personal characteristics or criminal behavior which would put society at risk,” one prosecutors said.

The Brazil icon and his brother, who also acts as his business manager, agreed to pay $200,000 in damages between them. Both men are expected to appear before a judge in Brazil every three months, Ronaldinho for a year and his brother for two.

Ronaldinho “is free to travel to whatever country in the world he wants but he must inform us if he changes his permanent residence” for a period of one year, the judge said.

The pair were first jailed in March when they entered Paraguay on a promotional tour but were found to have falsified Paraguayan passports and ID.

The pair’s lawyer maintained that neither Ronaldinho nor his brother knew the documents were fake, and had merely been given the documents by a sponsor upon their arrival.

According to reports, 18 people have already been arrested in connection with the case, the majority of them immigration officials or police officers.

Ronaldinho and his brother initially spent their detention in a maximum security facility on the outskirts of Asuncion, where the 2005 Ballon d’Or winner even helped his team to victory in a prison football tournament.

After 32 days they moved to house arrest on bail of $1.6 million, spending more than four months in $380-a-night suites at a hotel in the Paraguayan capital.

Despite his detention and Covid-19 restrictions, Ronaldino is said to have welcomed female guests to the hotel and spent his nights dancing and singing karaoke.

The former striker is considered one of football’s most colorful characters, living a Playboy lifestyle which has sometimes seen him fall foul of the authorities in his homeland.

In the summer of 2019 Ronaldinho reportedly had dozens of properties taken under the control of the authorities in Brazil, while also having his Brazilian passport confiscated over an unpaid fine and debts.

There were also claims that during the investigation – which centered on unpaid fines over an illegal construction in a preservation area at a property in his homeland – officials found just $7 in the star’s bank account.

It was reported in September that he had paid a fine of around $1.5 million to get his Brazilian passport back. 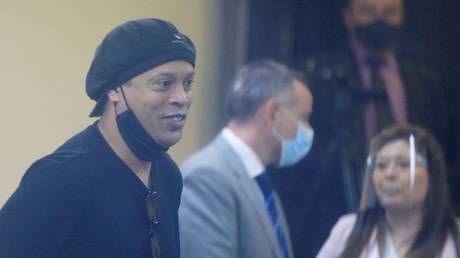 50 schools across England WILL mak...

Greta Thunberg back in school afte...