Rivals reunited: Lionel Messi and Cristiano Ronaldo to resume battle as Barcelona and Juventus drawn TOGETHER in Champions League

Rivals reunited: Lionel Messi and Cristiano Ronaldo to resume battle as Barcelona and Juventus drawn TOGETHER in Champions League

One of the most storied rivalries in recent football history is set for another chapter as Cristiano Ronaldo’s Juventus and Lionel Messi’s Barcelona were drawn against each other in today’s UEFA Champions League draw in Geneva.

The two European giants will clash on club football’s biggest stage after both sides landed in Group F during the draw, which was conducted by ex-Chelsea stars Didier Drogba and Florent Malouda.

Ronaldo and Messi, who have combined for an incredible 11 of the last 12 Ballon d’Or awards, have both had a stranglehold on European football throughout the last decade and beyond.

Messi currently has one more Ballon d’Or in his trophy cabinet, but Ronaldo can point to a more impressive record in the Champions League, having helped his former team Real Madrid to four Champions League trophies to Barcelona and Messi’s three.

By the time that Ronaldo’s Juventus takes on Barcelona this season, it will mark around two-and-a-half years since football’s two global superstars have been on the same pitch together, after last appearing in the same game on May 6, 2018 in La Liga.

Both players found the net in a 2-2 draw on that occasion.

In the head-to-head stakes, Messi has come up trumps in his duels with Ronaldo. In the 35 times that they have played in the same game, Messi has 16 wins to Ronaldo’s 10 (the rest were draws) and has hit the back of the net 22 times to Ronaldo’s 19.

Ronaldo and Messi are both in Group G.

G is for GOAT. We see what you did there UEFA #UCLdraw pic.twitter.com/aWxflMr1HU

Ronaldo and Messi have met in the Champions League 5 times before, resulting in two draws, one win in Ronaldo’s favor, and two wins in Messi’s favor.
Ronaldo failed to find the net in all of these matches, while Messi scored 3. pic.twitter.com/zXgcrnSNNn

Barcelona and Juventus will be joined in Group F by Ukrainian side Dynamo Kyiv and Ferencvaros.

Manchester United will play French powerhouse Paris Saint-Germain, RB Leipzig and Istanbul Basaksehir in what should be a fiercely-contested Group H. 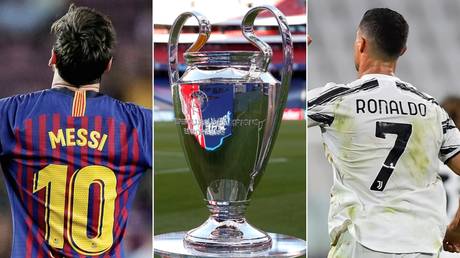 Denis Shapovalov takes aim at the...