Former Man United and England defender Rio Ferdinand has been banned from driving for six months after admitting to the latest in a series of charges after being clocked driving in excess of the speed limit last year.

The 41-year-old Ferdinand was found to have been travelling at a speed of 85mph, 15mph over the limit, in East Sussex on July 22 last year and was handed the ban after he attended a hearing at Crawley Magistrates Court on Tuesday morning, where he admitted the charge and was ordered to pay £822 ($1,087) in fines and associated court costs.

The incident added three penalty points to the nine already on his record, triggering the automatic driving ban.

Ferdinand argued in court that any ban would place “exceptional hardship” on him, due to him having to transport his children to school, as well as continuing his media career.

He also stated that it would be “very difficult” for his wife to coordinate the school runs, due to his children taking part in “different activities and different times at school.”

This comes after Ferdinand, who now words as a television pundit, was caught speeding three times in the span of just five weeks in Manchester in 2012, all of which took place on the same stretch of road. He was also handed a six month driving ban for those infractions.

Ferdinand also drew the ire of the footballing authorities during his playing career. He was banned from football for eight months between January and September 2004 after missing a drug test while a Manchester United player, forcing him to miss around half of a Premier League season.

Hi rio do u want picking up in the morning pal

The charge also harks back to memories of a now infamous tweet issued by Ferdinand’s then-Manchester United teammate Wayne Rooney in 2011, in which he enquired if Ferdinand “needed picking up in the morning“.

It might be time to ask that particular question again, Wayne. 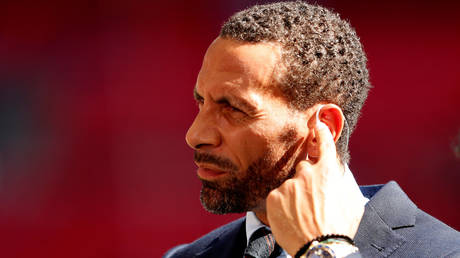