Pulling out of the French Open and Wimbledon citing mental health problems, Naomi Osaka is back on the Grand Slam circuit after her Olympics failure. And on the eve of the US Open, she has managed to make it all about her again.

Taking to Instagram, the 23-year-old posted a lengthy statement after recently “asking myself why do I feel the way I do”.

Of course this in itself is perfectly fine, especially from someone who is allegedly battling mental health struggles and is trying to understand themselves better.

However, Osaka came to the conclusion that she realizes “one of the reasons is because internally, I think I’m never good enough”, which leads one to question whether she is really cut out for elite sports.

Once more, there is no great shame if Osaka doesn’t have what it takes mentally to operate at the top level – few do.

But can you really picture words of this nature coming from the likes of a Michael Jordan or a Tiger Woods at her age?

By then Woods had won just two majors to her four, but Jordan did not achieve his first ring until the grand old age of 28.

Imagine if he had buckled under the immense roughhousing and trash-talking of bitter rivals the Detroit Pistons, as they knocked the Bulls out of the playoffs at the semi-final stage in ’88 and then in back-to-back Eastern Conference finals in ’90 and ’91.

Not to mention that before that, there were three first-round losses of scores of 3-1 to current champions, the Milwaukee Bucks, and then double 3-0 drubbings by Larry Bird’s Boston Celtics.

Finally, redemption came when they trounced the Pistons 4-0 on their way to seeing off Magic Johnson’s LA Lakers 4-1 in the last dance in 1991 – and the rest is history as Jordan did his first consecutive trio of championships.

Taking time away from the court to pursue baseball after his father was murdered, he then returned for his second threepeat from ’96-’98 while never once inflicting his trauma on the public or using it as an excuse for failures like the Orlando Magic skittling the Bulls in the ’95 semi-finals or to not fulfill media obligations.

In all honesty, we don’t even need to look to different sports or eras for better examples – though it is surprising to see Billie Jean King compare her own plight of coming out in the early 80s to Osaka’s.

But would such words even be typed by Serena Williams, who won the Australian Open while pregnant, or Novak Djokovic?

“Every time a new opportunity arises my first thought is, ‘wow, why me?'” Osaka asked.

She is after all the highest-paid female athlete in the world with four Grand Slam titles, so let’s can the mock outrage and surprise as to why everyone would want her to be the face of their products for handsome financial returns.

Osaka has been lauded for her post, but for those who looked beyond the cry for attention, her message actually came across as patronizing.

“You got up in the morning and didn’t procrastinate on something? Champion,” she beamed.

“Figured something out at work that’s been bugging you for a while? Absolute legend.”

If Osaka really wants to be seen as this champion of mental health she craves, then maybe she could have spared us this nonsense, or at least been more specific and highlighted genuine problems that depressed people face such as getting out of bed in the morning or venturing outdoors to pursue social encounters.

Not throwing such OTT hyperbole around and congratulating any old Joe Public for pretty mundane things while she is competing in lucrative tournaments.

“Your life is your own and you shouldn’t value yourself on other people’s standards,” Osaka said, and rightfully so, but to quip that she “can’t burden myself with those expectations anymore” is dross and it appears as though she is getting her excuses in early ahead of Flushing Meadows.

She claims to give her best and that’s all that anyone expects of her.

But continually looking to blame her shortcomings on anything other than not being good enough is wearing thin.

Real champions regroup, learn and come back stronger – not look for sympathy from the common man and woman and try to make links to their lives, which are clearly not the same and are often infinitely more difficult. 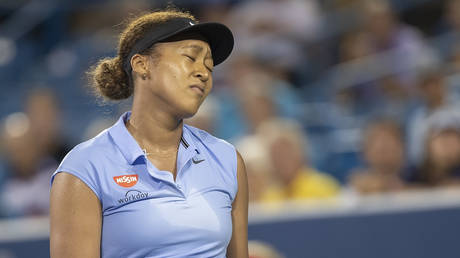 WHO ‘deeply worried’ about high Co...

Is the NFL creating a problem for...