Close
Trending News
HomeSport‘Right from the beginning he is talking’: Referee Herb Dean describes what it’s like to officiate a Khabib Nurmagomedov fight

‘Right from the beginning he is talking’: Referee Herb Dean describes what it’s like to officiate a Khabib Nurmagomedov fight

‘Right from the beginning he is talking’: Referee Herb Dean describes what it’s like to officiate a Khabib Nurmagomedov fight

UFC lightweight champion Khabib Nurmagomedov is well known for talking to his opponents during his fights, and referee Herb Dean has detailed exactly what Justin Gaethje can expect ahead of their main event clash this month.

The undefeated Nurmagomedov has been flawless throughout his 28-fight career to date, defeating all comers on his rise to UFC gold but as dominant as he has been in the cage Khabib is also known to maintain a running commentary throughout his fights.

The Russian’s November 2016 fight with Michael Johnson was marked by numerous statements from Nurmagomedov which were picked up on the broadcast, telling his opponent to “give up” as he rained down punches on the prone American.

“You have to give up now,” Khabib said mid-fight. “I need to fight for the title, you know I deserve this.”

A little less than two years after that, Khabib’s all-encompassing feud with Conor McGregor came to a head inside the cage in Las Vegas, with Nurmagomedov repeatedly demanding “let’s talk now” as he punished McGregor before eventually forcing him to tap to a fourth-round submission.

And as referee Herb Dean told Joe Rogan on a recent episode of his podcast, this type of in-fight bickering is commonplace when Khabib fights.

“He talks the whole time,” Dean said of being the third man in the cage during a Nurmagomedov fight.

“Right from the beginning he is talking.”

Of course, the back-and-forth between Nurmagomedov and McGregor’s camps didn’t end at the conclusion of their fight – with Nurmagomedov leaping from the cage to confront several members of McGregor’s corner team in a move which drew criticism from all circles of the sport.

Khabib explained his actions after the fight, saying that if McGregor did his talking before the fight, Nurmagomedov saved his response until afterwards.

“What about him talking about my family, my religion, the bus? Why are people talking about me jumping over the cage? My father talks to me about respect,” he said at the time.

“They call him a two-time champion, two-weight world champion but he taps. People, the media change MMA. This is a respect sport, not a trash talking sport. Guys, you cannot talk about religion. This stuff is important.”

Of course, the upcoming UFC 254 headliner between Nurmagomedov and Justin Gaethje doesn’t have quite the same level of animosity stoking their rivalry. But, as Dean suggests, Gaethje can expect to have to win not just the battle in the cage, but also the war of words. 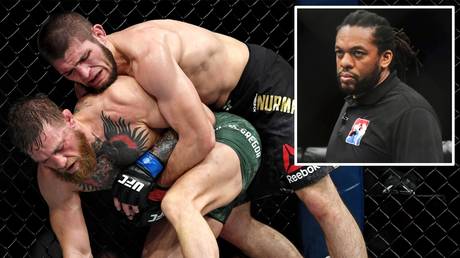