Angry fans at Serie A club Fiorentina have turned on winger Franck Ribery for voicing his terror after his house was robbed during a match, telling the former France star to “wash his mouth out” and namechecking Pablo Escabar.

Bayern Munich legend Ribery admitted he felt as if his “pants had been pulled down” by the raid, in which expensive handbags and jewelry belonging to his wife were swiped while he was helping his team win 2-1 at Parma on Sunday.

In a video that received more than half a million views, the World Cup finalist with France took fans on a tour of his ransacked home, suggesting that the ordeal had made him reconsider his decision to move to Florence from Munich, where his wife and children had been staying during the theft.

While the club’s hierarchy tried to reassure Ribery, the Indipendenti fans’ group issued a forthright statement condemning the 37-year-old for his response, suggesting that he had made the area sound like the Medellin home of infamous former drug lord Pablo Escobar.

“If a home robbery becomes the excuse to change teams, it doesn’t hold up,” they warned. “If you were expecting to come to Florence and fight for European qualification instead of [league] safety…just say it.

“It is known that contracts today are waste paper and the will of the footballers is crucial. If you expressed yourself correctly despite Italian not being your mother tongue, you don’t know the city in which you were lucky enough to come to end your wonderful career.

“You have arrived in the cradle of Renaissance and civilization, a city that [is] beautiful.

“Rich people steal everywhere but the wealthy can afford alarm and private surveillance systems, while the poor [cannot], because thieves also steal in the house of normal [people].

“Wash out your mouth before you refer to Florence as [being like] Medellin.”

Ribery, who has started all four of Fiorentina’s matches since Italian football returned from lockdown and won the player of the month award in September, said the “impression of being naked” was “unacceptable.”

“Passion or not, my family comes first and we will make the decisions necessary for our wellbeing,” he added, causing the group to accuse him of a lack of gratitude.

“If you have written those words then as far as we are concerned you can go,” they told him.

“You have arrived in a city where, despite your age, you have been welcomed as a god and where, despite this unfortunate season when you have spent more time banned and injured than on the field, people keep treating you as such.

“Yours would be inappropriate words in any case, but even more when said by a footballer who played in Istanbul and Marseille.”

As news of their fury spread, the Indipendenti followed up their statement by adding: “We understand and are sympathetic to Franck for the trauma he suffered. But we remain very critical of the way he expressed his outburst and its content.”

Ahead of his side’s match at home to Cagliari today, Fiorentina boss Giuseppe Iachini said the club had “tried to cheer [Ribery] up a bit.”

“Florence is a splendid and civilized city,” he pointed out.

“Unfortunately, as I told Franck, episodes like this happen everywhere, all over the world.

“There is great regret for what happened to him and the player’s private life being affected. The Florentines, however, have nothing to do with it.” 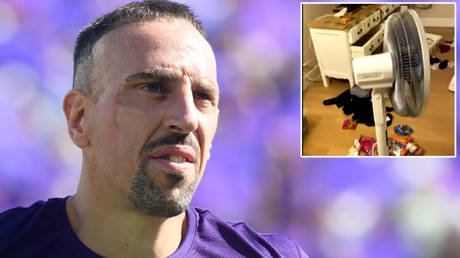