Close
Trending News
HomeSportReturn talks? Khabib Nurmagomedov says he has ‘something interesting’ to talk about with UFC president Dana White

Khabib Nurmagomedov gave his biggest hint yet that he might be ready to confirm his return to the octagon after revealing an intriguing detail about his upcoming meeting with UFC president Dana White.

Khabib and White are set to meet, for reasons unknown, but most fans are hopeful that their rendezvous will be more than just a social visit, with the UFC president known to be keen to bring the Russian champion back to the octagon in 2021.

Speaking to Sports.ru, Khabib explained what is likely to happen during his conversation with the UFC boss.

“I just want to see Dana. We always have fun,” he said, before hinting that something big could be discussed during their upcoming chat.

“I have something interesting for White, and he has something for me,” he hinted.

“We’ll see. We will have a big discussion.”

Khabib will face the media next Wednesday at a Moscow press conference, where more details about the UFC lightweight champion’s next steps could become clear.

But, right now, it’s anyone’s guess what could happen next for “The Eagle,” inside or outside the octagon. 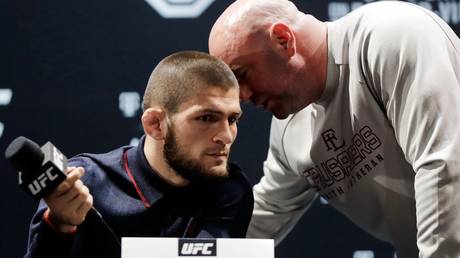