Amid a move which has sent shockwaves through one of football, former Barcelona skipper Carles Puyol has paid tribute to ‘friend’ Lionel Messi as it is confirmed that the Argentine great wants to leave the Camp Nou.

Messi communicated his desire to leave Barcelona on Tuesday, telling the club’s hierarchy that he intends to exercise a clause in his contract which he claims will allow him to move to pastures new before August 31.

Barcelona will almost certainly object to Messi’s interpretation of language in his contract which allows him to leave for free at the end of each season, with the club set to take a stance that it expired several weeks ago – while the player argues that the Covid-related extension to the season also extends the terms of his clause.

The loss of Messi – and particularly if it comes due to contractual red tape – will be be a blow to the club’s president Josep Maria Bartomeu, who is to seek re-election next year. And, as some fans have already noted on Twitter, losing Lionel Messi isn’t exactly the best platform to campaign on.

We lost Neymar under Bartomeu. We are 97% close to losing Messi, the greatest footballer ever to kick a ball under the same man. Bartomeu should be in jail.

If 2020 had a face. Fuck you Bartomeu. pic.twitter.com/fwKhtAa6E7

Even amid the whispers from football beat reporters in the past weeks that there was indeed legitimacy to Messi’s malcontent, this is a day that no Barcelona fan wanted – or even expected.

For the longest time, and particularly during Messi’s marvellous prime, he seemed to be the epitome of the ‘one club man’. But for all the trophies and records collected by that magnificent Barcelona side of several years ago, slowly but surely they have been strip-mined of their most essential minerals.

As a Barcelona fan, I am angry that #Messi want to leave. Now or later it will happen one day, time to come and time to leave. Messi we are very grateful to you and we wish you all the best in your next destination and next challenge.. I will be solidly behind you. Thank you

HOW DARE YOU DISRESPECT LEO a MESSI, HE’S BIGGER THAN ANYTHING YOU COULD EVER DO FOR BARÇA @jmbartomeu

All are Barça legends. No one wants to be next to Bartomeu and his board of directors pic.twitter.com/p0hPmaGcOd

Xavi and Andres Iniesta, the two men he held court in the Barcelona midfield for a generation, moved on years ago. Neymar opted to step out of Messi’s shadow and move to Paris Saint-Germain. Luis Suarez is thought to be on his way out in the coming weeks.

In their stead? Ousmane Dembele, Antoine Griezmann… and Martin Braithwaite?

However, Messi’s input to this Barcelona team will never be forgotten as noted by the man who captained Messi to numerous trophies.

“Respect and admiration, Leo. All my support, friend,” he wrote on Twitter via translation, with Luis Suarez also chiming in to show his support. 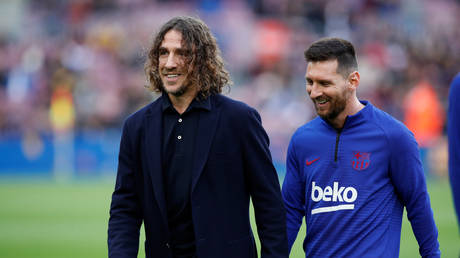 Lionel Messi has made the RIGHT de...

Do they look alike to you? NBC roa...