RESPECT after battle: Mateusz Gamrot SALUTES Guram Kutateladze after victorious UFC rival tells him, ‘It was YOUR fight’ (VIDEO)

RESPECT after battle: Mateusz Gamrot SALUTES Guram Kutateladze after victorious UFC rival tells him, ‘It was YOUR fight’ (VIDEO)

The martial arts spirit was present in abundance after Guram Kutateladze defeated Mateusz Gamrot on UFC Fight Island, as the Georgian fighter told his rival that he believed the judges had given the wrong man the victory.

Kutateladze and Gamrot were both making their respective UFC debuts on UFC Fight Island, and battled all the way to the scorecards in a bout that saw both men earn $50,000 “Fight of the Night” bonuses.

After their bout went the distance, the result was left in the hands of the three octagonside judges, and although Kutateladze’s hand was raised after he edged a split-decision verdict, the Georgian debutant wasn’t happy with the outcome.

Kutateladze then addressed the shell-shocked Gamrot, who was leaving the arena floor after suffering the first defeat of his 18-fight MMA career.

“I’m not happy, because this is not what I was waiting for,” he said.

RT Sport’s cageside footage showed Gamrot’s reaction as he stopped by the octagon to hear Kutateladze’s words of support, before raising a hand to salute the Georgian after his show of respect after their three-round war. 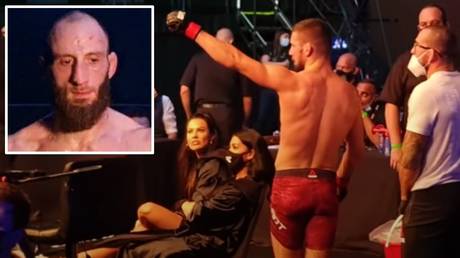