Close
Trending News
HomeSportReffing and blinding: PSG stars moan that no-nonsense Champions League ref, who has previous with Neymar, told them to ‘f*** off’

Reffing and blinding: PSG stars moan that no-nonsense Champions League ref, who has previous with Neymar, told them to ‘f*** off’

Reffing and blinding: PSG stars moan that no-nonsense Champions League ref, who has previous with Neymar, told them to ‘f*** off’

Uncompromising Dutch ref Bjorn Kuipers, who was once branded “disrespectful” by Neymar after booking the Brazil playboy for arguing with him, has been backed by many fans after two PSG players accused him of swearing at them.

Experienced Kuipers has a reputation for letting matches flow and occasionally giving as good as he gets to players, and the 48-year-old was tested at times on Tuesday night as he oversaw Paris’s tame Champions League semifinal exit at Manchester City.

A multi-millionaire through his ownership of a supermarket chain in his homeland, Kuipers held his own with some of the most valuable and most notoriously dramatic players in the world – and two have now accused him of dropping the f-bomb on them.

I’ve always suspected Bjorn Kuipers was a legend but it’s nice to have that suspicion emphatically confirmed https://t.co/jC4DHcs85Z

“We talk about respect with referees,” Ander Herrera told RMC about an alleged war of words between Kuipers and one of his teammates.

“The referee tonight said ‘f*** off’ to Leandro Paredes. If we say that, we get a three-to-four match ban.”

Thank god these footballers would never dream of swearing at anyone!

Fellow midfielder Marco Verratti, who curiously claimed that PSG had the better of a game in which they were beaten 2-0 and did not manage a shot on target, offered even more extraordinary claims.

Not like he’s the perfect referee and he makes the odd mistake too, but absolutely love the way Bjorn Kuipers *tries* to officiate games.

Doesn’t buy into the moans and the flops and let’s players get stuck in. He allows the game to flow, which is so much better as a viewer. pic.twitter.com/SxGQcPjQM6

Not surprised. They were harassing him non stop. Must have taken all of his will power not to smash one of them in the face

Angel di Maria was sent off in the second half, mirroring the first-leg fate of Idrissa Gueye, who was sent off for a horrendous tackle on Ilkay Gundogan that many felt had severely endangered the City playmaker.

“They lost their nerve and started to kick us,” two-goal hero Riyad Mahrez told BT Sport on Tuesday. “After the red card, it was more comfortable.”

i dont blame the ref

Fans offered a mixed reception to the duo’s allegations, with many pointing out that players are routinely heard directing choice words at officials on the pitch at a time when largely empty stadiums mean that their voices can be picked up clearly.

“Honestly, this cements Bjorn Kuipers as the best ref in the world,” said one. “PSG players are masters in the dark arts and he wasn’t having any of it.”

Another admitted: “Not surprised. They were harassing him non-stop. Must have taken all of his will power not to smash one of them in the face.”

Kuipers booked Neymar for dissent during a 2018 World Cup group stage game between Brazil and Costa Rica in Russia, and did so again when the world’s most expensive player complained about his treatment by the opposition when Paris played Napoli last year.

“The referee told me something he should not have,” Neymar told ESPN afterwards. “It was disrespectful. I do not want to repeat what he said to me. However, somebody high up should do something.

“He cannot be as disrespectful as he was with me. On the pitch, we are asked to show respect towards the referees. We should get the same in return.”

A Neymar fan account was predictably scathing towards Kuipers after his latest set-to with their hero. “Bjorn Kuipers is still the worst and most unprofessional official that’s ever been in the sport,” they insisted, calling him a clown.

Few seemed to feel the same. “He doesn’t buy into the moans and the flops and lets players get stuck in,” said a supporter. “He allows the game to flow, which is so much better as a viewer.” 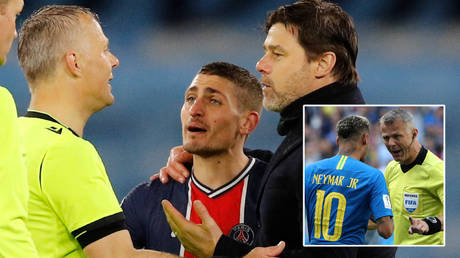 Neymar fails to score for a sevent...