The glamorous Russian MMA fighter who shot to fame when she floored a 240kg man in an intergender fight in 2020 is about to return to Moscow, making her debut for Bellator MMA, who signed her after that famous bout.

‘Red Queen’ Darina Mazdyuk, a flyweight with a taste for sparring sessions, luxury cars and smouldering photoshoots, needed just 90 seconds to beat hefty blogger Grigory Chistyakov in a technical knockout that achieved her crafty ambitions of hitting the headlines.

Bellator bosses had seen enough and duly signed Mazdyuk to a multi-fight deal, with her debut against Katarzyna Sadura set for the undercard of MMA icon Fedor Emelianenko’s fight with Timothy Johnson at Bellator 269 in Moscow on Saturday.

Mazdyuk has explained that she realized the promotional value of her unusual fight with Chistyakov and believed it would attract fans and draw attention in Russia and the USA.

BREAKING: @BellatorMMA has signed Darina Madzyuk (3-1) to an exclusive contract. She will compete at flyweight and went viral earlier this month for KOing this 529lb man in Russia….pic.twitter.com/MCy5Tsz7od

“The idea of making an inter-country, intergender fight creates something really nice and really exciting to look at,” she said.

“The goal was to reach a lot of people and show to the world that these fights can exist, they can take place and how exciting they can be.

“I believe that they are something to look at beyond your traditional view of fighting.

“With all of the skills I acquired, I can put up even more of a fight. Even a girl who weighs 50kg can put up a show.”

The 29-year-old had won three of her four fights before that contest, although she acknowledges that little in her career may compare to the sight of her hammering in shots on a colossal grounded man.

“It had such a volume of attention that nothing can overshadow that,” she said, responding to the current debate around the legitimacy of ‘freak fights’ and remarks by high-profile figures including Emelianenko expressing reservations about them.

2 years before, Darina Mazdyuk just make her professional MMA debut and she met the legendary GOAT of MMA.

Next month she will make her dream come true to compete in the same card of Fedor Emelianenko in #bellatormoscow @BellatorMMA on October 23rd! pic.twitter.com/fgEGF1tGpb

“There isn’t that much of a future for that kind of style. The bigger you get, the more people say about you.

“That’s quite reasonable and the only way to get to the top. I don’t focus on what negativity there is.

“Fedor can have any kind of opinion he wants to. The mentality of Russia is differing from other countries.

“These fights can draw a lot of attention. From these fights, you can spot some really good fighters.”

Taekwondo specialist Sadura has four wins and four defeats from her eight fights. She shared a respectful face-off at the weigh-in with Mazdyuk, who believes her karate skills will see off the Pole.

“I have prepared for specific things with my coach,” she said. “I have chosen a technique very, very carefully.

“I chose her on purpose because I know how to tailor my training for the fight. This fight is going to be a complete face-off of two different techniques. In close-contact fights, taekwondo is just not as effective as karate.”

Describing herself as the “one female fighter in Bellator”, Mazdyuk also told a fan that she expected to win within the first two rounds, asking: “Are you ready for a truly spectacular stand-up fight?”

“I know all these legendary fighters as regular people, rather than MMA legends.” 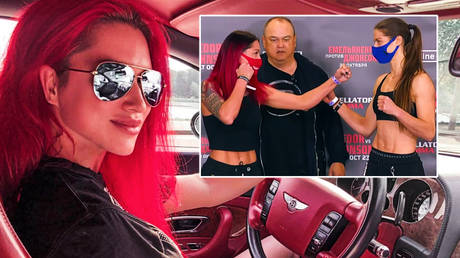 Football fans in hysterics as...

‘Shame on you’: South Africa’s been ‘canceled’ over new Covid variant, claims cricketer