‘Red Bull vs Qatar’: RB Leipzig and PSG’s Champions League semifinal is a glimpse into nightmare future for football’s purists

‘Red Bull vs Qatar’: RB Leipzig and PSG’s Champions League semifinal is a glimpse into nightmare future for football’s purists

When Paris Saint-Germain and RB Leipzig meet in their Champions League semifinal in Portugal on Tuesday it will send shivers down the spine of many footballing purists – but it is a match which shows much about the modern game.

PSG and Leipzig have both reached the last four in Portugal on footballing merit, but the meeting at the Estádio da Luz in Lisbon is a contest which breaks new ground – and not necessarily to the benefit of the game.

Beyond pairing the French champions with a team which finished third in the Bundesliga, PSG against Leipzig is being billed as a showdown between Qatar and Red Bull.

The money-men from the French capital have the financial clout of their Qatar Sports Investments owners behind them, while Leipzig have drawn on a sponsorship model which allies them to a host of Red Bull-affiliated clubs.

Each model has inherent problems and has faced no shortage of vitriol from within the sport.

IT GIVES YOU WINGS

Founded in 2009, RB Leipzig have risen through the ranks spectacularly – to the extent that they now stand just two games from footballing immortality.

But this is not a fairytale story of plucky underdogs defying the odds; instead, it is viewed as a horror show by many in Germany, a country where the football club is revered as an extension of the community, owned by and existing for the fans.

Unashamedly set up as a vehicle to drive the promotion of the energy drinks brand which sponsors it, RB Leipzig has turned that principle on its head.

The story began when Red Bull bought the rights to German fifth-tier team SSV Markranstadt in 2009, having already explored options for other teams in the country but meeting strong resistance from fans.

Leipzig was seen an ideal home for the venture: a large city in the former East Germany starved of top-level football, and a base to build a challenge to rival the traditional powerhouses of Bayern Munich and Borussia Dortmund.

Leipzig joined a growing family of Red Bull-affiliated teams including Red Bull Salzburg in Austria and the New York Red Bulls, although German laws prevented the brand from having such an overt presence in the club’s name.

However, that was nothing a nifty bit of lexical chicanery couldn’t solve, as the club officially named itself RasenBallsport Leipzig – which translates as ‘lawn ball sport’ Leipzig.

RB Leipzig was born, and with the Red Bull logo front and center on the team’s shirt, it was clear what its initials really stood for.

But the naming subterfuge is not the only loophole the club is accused of exploiting: there are also angry allegations that it has circumvented Germany’s sacred ‘50+1’ rule – which states that members (i.e. fans) must own the majority of shares and must have a say on issues such as ticket prices.

At Leipzig, the argument is that fewer than 20 members – mostly linked to Red Bull – own the majority of the club, thus taking the decision-making process out of the hands of the fans.

As Leipzig rose up the footballing hierarchy, so did the opprobrium at Red Bull’s supposed trampling of the sanctity of German football.

Fans from some rival teams have boycotted games at Leipzig’s Red Bull Arena, while at away games, Leipzig fans have been targeted.

During a German Cup game in 2016, Dynamo Dresden fans threw a severed bull’s head onto the pitch.

The animosity has earned Leipzig the tag ‘the most hated club in Germany’, and beyond the club’s own fanbase there are unlikely to be many fellow Germans supporting the team in tonight’s game.

But however begrudgingly, Leipzig are at least beginning to win more and more respect for their performances on the pitch.

By finishing third in this season’s Bundesliga table, they cemented the position they held last season just behind the traditional big two of Bayern Munich and Borussia Dortmund. They have a loyal home following, with fans typically filling their 40,000-seater home in pre-coronavirus times.

In 33-year-old head coach Julian Nagelsmann, they have one of the most exciting managerial prospects in world football – a man nicknamed ‘Baby Mourinho’ and who has already turned down the advances of Real Madrid.

Emerging from a Champions League group containing fellow semi-finalists Lyon as well as Benfica and Russian champions Zenit Sr. Petersburg, Leipzig cruised past Jose Mourinho’s Tottenham in the last 16 before edging out Diego Simeone’s Atletico in the quarterfinals.

Leipzig’s hyperactive, high-energy pressing has become their hallmark, and is entirely on-brand given their sponsors.

They do not boast an expensively-assembled squad; instead, they have a savvy recruitment policy which brings in young talent and make use of the network of clubs under the Red Bull umbrella.

Austrian midfielder Marcel Sabitzer – one of the sensations of this year’s tournament and scorer of a spectacular group stage goal against Zenit – had a spell on loan at Salzburg before being integrated at Leipzig.

To get you in the mood for our @ChampionsLeague clash with Tottenham on Wednesday, here’s that Sabitzer goal against Zenit… 🚀🤤

Players to have come through the Leipzig ranks include Timo Werner, the German forward who joined Chelsea this summer, and midfielder Naby Keita, who made the switch to Liverpool in 2018.

The Red Bull network of clubs is a model becoming increasingly popular, and is similar to the City Football Group set-up headed by Manchester City, and which and includes clubs in Spain, Japan, Australia and the US.

It may be reviled outside the club, but the model adopted by Leipzig their ambitious sponsors is one that is working, and which will be put to its biggest test yet on Tuesday night in Portugal.

The team Leipzig face in that challenge is a club with far more European pedigree but with no less scrutiny over their backing.

Since their Qatar Sports Investments (QSI) owners rolled into town in 2011, PSG have become a club synonymous with their petrostate sponsors.

If Leipzig’s tale is one of a company avowedly using a club for marketing clout, then PSG have the ambitions of an entire state hitched to it.

Far beyond the marketing ambitions of a mere energy drinks brand, the PSG project is a way for a state to purchase cultural leverage and ‘sportswash’ its image, or so the argument goes.

The French club’s appearance at this stage of the Champions League may be far less of a surprise than Leipzig’s, but is open to equal resentment among fans.

The most obvious parallels for PSG are with Manchester City and their UAE backers, or with the Saudi Arabia’s recent – and ultimately doomed – efforts to buy Newcastle United.

We are beyond the level of football clubs becoming the playthings of wealthy owners such as Roman Abramovich at Chelsea; they are now beholden to the interests of states, becoming pawns in a game on almost geopolitical levels.

As with Leipzig, a football club suddenly becomes something altogether different from what it supposedly should be, according to purists of the beautiful game.

Qatar Sports Investments vs Red Bull really would be a semifinal all football romantics could get behind.

This state of play is why onlookers have gloated at PSG’s failings in Europe up to this point.

More than a billion euros have flowed through the PSG coffers in the ensuing years since its Qatari owners arrived, but despite the world-record arrival of Neymar and the signing of French prodigy Kylian Mbappe, the French champions have flattered to deceive.

An embarrassment of domestic titles – including four trebles in the past five years – has not been followed with success in Europe.

Prior to this year’s run to the last four, PSG had suffered three successive last-16 exits, before that having fallen at the quarter-final stage for three seasons in a row.

Many rubbed their hands with glee at those failures – money could not buy success in football after all.

Gimmicky marketing and the constellation of stars aligned in Paris could not manufacture a team with the character and spirit to win the biggest prizes, or so the argument went.

But the indications are that this time around things could finally be different, and that PSG’s Qatari backers could finally see the return on their investment that they crave most.

Neymar is a more focused force and seemingly less distracted now that a return to Barcelona is firmly off the cards, and the Brazilian was the driving force in the stirring comeback against Atalanta as PSG showed the kind of grit so lacking from their previous campaigns.

Manager Thomas Tuchel has already said that Kylian Mbappe – a second-half substitute against the Italians – will be fit to start against Leipzig.

There is the formidable form of Bayern Munich in the other side of the draw, but both PSG and Leipzig have been presented with their best chance yet of securing the European glory.

The question, though, is whether fans can suspend judgement on what has fueled the two teams’ success and simply enjoy the football when they meet in Lisbon on Tuesday night. 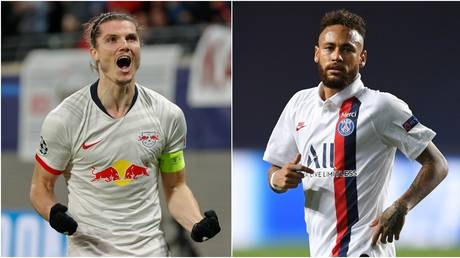