Close
Trending News
HomeSport‘Real-life ninja stuff!’ Watch and be AMAZED as Joaquin Buckley delivers one of the ‘CRAZIEST knockouts’ in UFC history (VIDEO)

‘Real-life ninja stuff!’ Watch and be AMAZED as Joaquin Buckley delivers one of the ‘CRAZIEST knockouts’ in UFC history (VIDEO)

‘Real-life ninja stuff!’ Watch and be AMAZED as Joaquin Buckley delivers one of the ‘CRAZIEST knockouts’ in UFC history (VIDEO)

UFC middleweight Joaquin Buckley produced a knockout from the gods to claim the most spectacular victory of the night on UFC Fight Island on Saturday night as he starched Impa Kasanganay with a stunning spinning back kick.

Buckley attempted to connect with a left high kick to the head, but Kasanganay blocked it and held on to Buckley’s leg to set up an opening for himself to land a big shot.

But Buckley saw it as an opening for himself, and spun swiftly and connected with a vicious turning back kick, which connected hard with Kasanganay’s chin, knocking him out instantly.

“That was one of the most spectacular knockouts we have ever seen!” exclaimed play-by-play commentator John Gooden, while co-commentator and UFC fighter Paul Felder described it as “one of the craziest knockouts I’ve ever seen in my life!”

Gooden then labeled the spectacular technique as, “Real-life ninja stuff,” as those present inside Flash Forum attempted to process what they just witnessed.

Go all angles on @NewMansa94‘s masterpiece 😳

It was one of the best knockouts seen in 2020, and arguably one of the most spectacular knockouts in UFC history as Buckley produced a highlight-reel moment for the ages in Abu Dhabi. 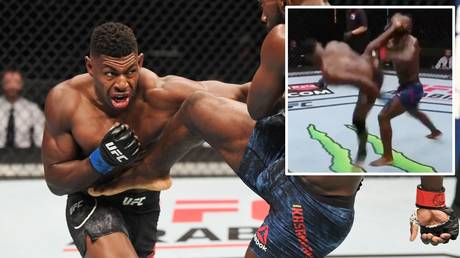