Sergio Ramos extended his incredible scoring record for Real Madrid as he scored the only goal in a 1-0 win away to crosstown rivals Atletico Madrid, as Los Blancos extended their lead at the top of La Liga to SEVEN points.

Quique Setien appears one step closer to the Barcelona exit door after Zinedine Zidane’s Real Madrid earned three more points with their win away to Atletico.

A solitary Sergio Ramos goal separated the sides, with the defender’s spot-kick strike placing him ahead of the likes of Zidane, Luis Figo and Xavi in the Spanish league’s all-time scorer stakes.

Ramos’ 73rd-minute penalty means his team is now firmly in the driving seat in their title race against heated rivals Barcelona, though the Catalan club can reduce the deficit to four points if they win away at Villarreal on Sunday evening.

Incredibly, the Real Madrid skipper’s goal was his fifth in just seven games since the La Liga restart, as his team hit championship form at the perfect time.

📊 | Sergio Ramos:
– set the record for highest goals for a defender in a La Liga season with 10
– top La Liga goalscorer since the restart with 5 goals
– scored 7 in the last 12 games including 2 game winners
– 96 goals for Real Madrid in all competitions

Afterwards, Zidane addressed comments that penalty was a soft one.

“It’s easy to … talk about controversies but that’s not the case. We are doing phenomenally well. We are giving everything on the pitch and we deserve everything we are achieving,” he said to the media.

“I don’t like to get involved in these discussions but what I cannot accept is hearing that we are top of the table because of referees’ decisions.

“We deserve more respect for what we are doing and I’m tired of people saying we are winning because of referees.”

Zidane’s side have four games remaining if they are to see out what would be their first Spanish league title since 2017 – and just their third in the past 12 years.

When you find out that Sergio Ramos has scored more La Liga goals than Zinedine Zidane 🤯 pic.twitter.com/0vK2YKIi8h

Barcelona, meanwhile, have been in patchy form since football resumed, dropping points to the likes of Atletico, Celta Vigo and Sevilla – and another bad result on Sunday could seal Setien’s fate as rumors grow increasingly robust that the manager – who was appointed in January – could be set for a swift exit from Camp Nou.

Reports in the past few days that the club had reached a verbal agreement with former captain Xavi to take over the managerial reigns at the club appear to have been dashed, though, as the 133-times capped Spaniard has reportedly inked a one-year extension to his contract as head coach of Qatari team Al Sadd. 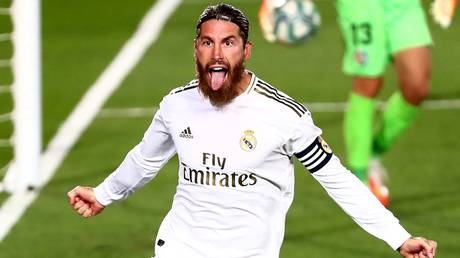