Bare-knuckle pair Pearl Gonzalez and Charisa ‘Sweetheart’ Sigala have taken to social media to share their latest preparations for their BKFC clash, which will take place on a stacked card at the Hard Rock Hotel on June 26.

“I’m not really a “Namaste” girl, I’m a beat the f+×÷= outta something kind of girl! Going into war…,” wrote Gonzalez on Twitter, while sharing a photo of herself sweaty and punching a heavy bag yesterday.

“Failure will never overtake me if my determination to succeed is strong enough,” she also wrote elsewhere.

I’m not really a “Namaste” girl, I’m a beat the f+×÷= outta something kind of girl! 😈 Going into war… watch on @bareknuckle.tv app…June 26th pic.twitter.com/GTl3xQLhHC

Like fellow pin-up Paige VanZant, Gonzalez is making the switch from the world of MMA to the ruthless bareknuckle circle in hope of improved paydays and better success.

“Pearl is a tremendous addition to our growing list of female fighters,” said president Dave Feldman upon signing her.

“Her best skillset is striking which makes this the perfect transition for her career. She’s very popular in the combat sports world both for her fighting ability in addition to commentating on different platforms and we can’t wait to start working with her.”

“I made the biggest sacrifice of my life, packed up everything and moved to Brooklyn, New York permanently to train with the greatest female boxer in the world, Amanda Serrano,” Gonzalez herself remarked.

“I promise to dedicate my life to becoming the next BKFC World Champ and couldn’t be happier to start this new chapter in my life!”

As VanZant was already beaten by Britain Hart in her maiden outing for her maiden promotion, however, showing off ghastly facial injuries after, Gonzalez will hope to make a better debut.

Her foe is Charisa ‘Sweetheart’ Sigala, a fellow rookie with the BKFC who nurses a 4-2 record in MMA after starring in the Gladiator and Combate Americas championships.

“Ready to bring the fire next Saturday” she wrote of their meeting on Instagram, alongside a string of flame emojis.

And with the cheeky post, she sent fans online into raptures with a revealing shirt that showed off her best features. 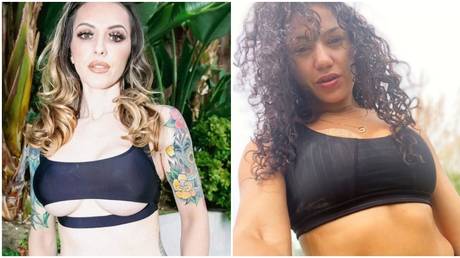