Close
Trending News
HomeSport‘Racking them up against USELESS teams’: Ronaldo closes in on goals record – but endures mockery as opponents were minnows Andorra

‘Racking them up against USELESS teams’: Ronaldo closes in on goals record – but endures mockery as opponents were minnows Andorra

‘Racking them up against USELESS teams’: Ronaldo closes in on goals record – but endures mockery as opponents were minnows Andorra

Cynics have questioned Cristiano Ronaldo after the Portugal hotshot took his tally of international goals to 102, celebrating moving seven behind the all-time record after a late goal at home to tiny Andorra in a friendly.

Portugal’s all-time top scorer said he was thrilled to have reached another “historic” landmark with his nation on Instagram, helping them to thrash Andorra – ranked 145th in the world – 7-0 in a friendly in Lisbon.

Victory meant the Juventus striker has won 100 matches with Portugal, although his latest victory, against a country with a population of 77,000 and four wins in their entire history, caused some fans to challenge whether the achievement was overstated.

Of the teams Ronaldo has scored at least four against, accounting for half of his total, the strongest are the Netherlands, Hungary and Sweden.

I’m not sure “International Friendly” is the words I would have used to describe it pic.twitter.com/Zus2Y9zPIM

Ronaldo has seven against Lithuania, six against Andorra and five against Latvia, Luxembourg and Estonia, who have one qualification for a major tournament in their current guise among them.

The 35-year-old scored a hat-trick against Spain in a group stage classic at the 2018 Russia World Cup but has performed surprisingly poorly in terms of goals against the “big five” European nations, with that treble against La Roja representing his only goals in 15 games against the continent’s elite.

He has scored at least once against the likes of Kazakhstan, Saudi Arabia, Egypt, the Faroe Islands and Estonia.

“Goodness me,” retorted one fan. “Andorra – says it all. Can they really be counted?”

Another said: “Racking up goals against useless teams in useless friendlies.”

Ali Daei, the Iran legend whose record of 109 goals in 149 appearances is on the brink of being overtaken by Ronaldo, needed fewer matches than his imminent successor’s current total of 168 games in which to reach the number.

Daei became the first man to score 100 international goals before retiring in 2006, although the caliber of opposition he faced features many of the teams in the very lowest echelons of the rankings.

Among them, Daei ravaged Sri Lanka – currently the fifth-lowest ranked nation – with a five-goal haul in an Asian Cup Qualifier at home in 1996, and scored four in a 19-0 win over Guam, who are currently rated as the 199th-best team in the world, in a 2002 World Cup Qualifier.

Hungary hero Ferenc Puskas, who is third behind Daei and Ronaldo, arguably had a tougher run and was more prolific in reaching 84 goals in 85 appearances, with a hat-trick against Luxembourg and one against Lebanon producing his only goals against teams never to have qualified for finals.

Some supporters argued that Ronaldo’s appearances and goals against lowly opposition provided further demonstration of his remarkable consistency and relentless desire to reinforce his position as one of the greatest players of all time.

Nah it will be matched by Mbappe, Haaland, Kane, Lukaku etc. They are all actually scoring in a higher rate. Considering how pathetic Euro qualifiers are, I don’t see why they wouldn’t match Ronaldo’s record

Whether people deem Ronaldo the best ever or Messi the best ever, no one can deny that Ronaldo’s 102 International goals is an incredible statistics, unlikely to be matched in our generation, if ever. Crazy to think how many goals he could end up with for Portugal before retiring

He was understandably distraught to miss out on the chance to face one of his favorite teams, Sweden, after testing positive for COVID-19 last month.

“He is in the room saying he wants to play,” Portugal boss Fernando Santos said at the time, as photos emerged of Ronaldo watching training from a balcony. “He talks to us from upstairs.”

Ronaldo’s nemesis, Lionel Messi, is trailing in his key Ballon d’Or rival’s wake when it comes to international goals, although he can enter the top 10 international scorers of all time outright should he net at least twice in Argentina’s matches against Paraguay and Peru over the next six days.

Brazil forward Neymar should have more time on his side than Ronaldo and Messi at the age of 27, currently standing seven goals shy of Messi’s total for Argentina and one ahead of Robert Lewandowski, the Poland poacher and last season’s runaway top scorer in the major leagues in Europe.

Fans also predicted that Norway youngster Erling Haaland, who has six goals in seven international appearances at the age of 20, and World Cup winner Kylian Mbappe, who is a year older and has scored 16 times in 38 outings for France, could threaten Ronaldo’s record at their current rate of goals. 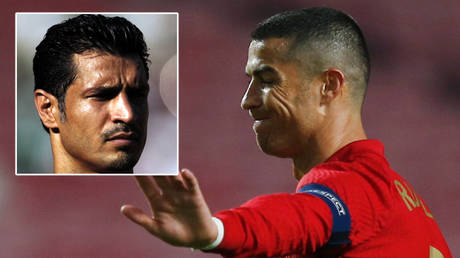