UFC welterweight and part-time Twitter protagonist Colby Covington has called out LeBron James and other US sports stars over Wednesday’s boycotts, telling them to “become cops” if they really want to make a difference.

NBA team the Milwaukee Bucks triggered a wave of sporting postponements when they refused to play game five of their first-round playoff series against the Orlando Magic, in protest at the police shooting of black man Jacob Blake.

The NBA later announced that both the day’s other scheduled matches – the Houston Rockets versus the Oklahoma City Thunder, and the LA Lakers versus the Portland Trail Blazers – would also be postponed.

Other leagues soon followed suit, with MLB games being called off after teams decided not to play and five MLS matches being postponed.

Elsewhere, tennis player Naomi Osaka decided to pull out of her semifinal at the Western and Southern Open in New York, prompting organizers at the event to announce that play would be paused.

It all appeared too much for Trump-supporting UFC fighter Covington, who trained his sights on basketball icon James and the stars of the NBA and MLB.

The pile-on was swift in coming for the former interim champ, including from current UFC welterweight ruler Kamaru Usman, who defeated the American via fifth-round stoppage in December.

“I really wish someone would just break your jaw already..,” wrote Usman, adding a ‘tick’ emoji in reference to the damage he inflicted on his rival during their bout.

I really wish someone would just break your jaw already… ✅ https://t.co/ULJbCFQQUT

Others urged Covington to step into the cage with Lakers star James, claiming that the basketball icon would dish out a similar beating.

Even casual followers of Covington will be unsurprised by the latest comments from the 32-year-old fighter, who is an avid supporter of US President Donald Trump and enjoys the personal support of members of the presidential family when he competes.

The next time Covington steps into the UFC octagon will be against former welterweight king Tyron Woodley in their main event at UFC Fight Night on September 20.

The bombastic Covington will be aiming to pick up a 16th win in what will be his 18th professional contest. 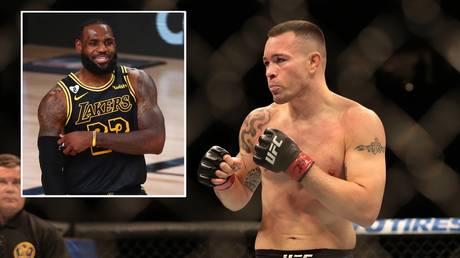 Division in the NBA protest ranks?...

You can see Jupiter AND Saturn nex...