More than just a game of football, Sunday’s Champions League final could provide Paris Saint-Germain’s Qatari benefactors with bragging rights over their regional petrostate rivals after plowing vast sums into the French club.

PSG will face either Bayern Munich or Lyon in Sunday’s European club showpiece in Portugal, knowing that victory will hand the club the biggest title in their 50-year existence.

The prospect of PSG etching their name onto the famous Champions League trophy for the first time has, however, cast the spotlight back onto how the club from the French capital have fueled their success.

A PSG win would be celebrated wildly on the streets of Paris, but also felt far away in the Gulf – where European football clubs have become pawns in a game among petrostates keen to buy cultural leverage in the West and supposedly ‘sportswash’ their own image.

In PSG’s case, their Middle Eastern connection was born in 2011 when Qatar Sports Investments (QSI) – a subsidiary of the Gulf state’s sovereign wealth fund – took control of the club. With chairman Nasser Al-Khelaifi at the helm, so began a lavish spending spree which has rarely let up ever since. All told, PSG’s outlay on players during the reign of their Qatari owners is estimated to come in at over €1.2 billion ($1.43 billion), and includes the mind-boggling summer of 2017 when they obliterated the world transfer fee record to splurge €222 million ($265 million) on Brazilian star Neymar before snapping up French prodigy Kylian Mbappe in a deal worth around €145 million ($173 million).

Thus far, that investment has yielded spectacular domestic dividends, to the extent that PSG have scooped a remarkable 18 of the 24 trophies on offer in France during their eight full seasons under Qatari ownership. But success in the Champions League – that most coveted of prizes – has been much harder to come by. PSG fell at the quarterfinal stage in the first four seasons after the Qatari takeover, and then went backwards by only making the last 16 in the three subsequent seasons. This year, finally, PSG are within touching distance of capturing the biggest prize in club football.

There are reports that the Emir of Qatar will be in Lisbon for the final this weekend, signaling the magnitude of what PSG can achieve, but also just how inextricably linked their success is with the flow of money from the Middle East. Aside for being in direct competition with their rivals on the pitch, PSG now have the interests of a foreign nation projected onto their shoulders.

In the case of Qatar – who will hope to further bolster their football credentials as hosts of the World Cup in 2022 – their investment comes alongside similar outlays by rivals in the regional and in particular Abu Dhabi, where members of the royal family have owned Premier League club Manchester City since 2008.

Both Qatar and the UAE stand accused of using football to sportswash an image stained by a dubious human rights record and laws considered anathema to many in the West. On a broader scale, the rivalry in the region has become increasingly bitter since the blockade imposed on Qatar by regional rivals in 2017, ostensibly over allegations that it sponsored terrorism.

The biggest regional players, Saudi Arabia, are late to the football party, but this summer made a bid to acquire Premier League club Newcastle United. That particular saga also exposed the tensions between Gulf rivals which have been transposed onto sport, with accusations of Saudi piracy of Qatar-based Premier League broadcasts being a major concern in what was ultimately a doomed bid for Riyadh to get a serious foothold in football.

Beyond the ethical issues of states using football clubs to wage war by proxy or burnish their image, both PSG’s and Man City’s rise has been accompanied by questions of the legality of the spending that has facilitated it. The English club escaped a two-year Champions League ban after winning an appeal in July against a UEFA decision to sanction them for alleged breaches of Financial Fair Play (FFP) by inflating sponsorship agreements with companies in Abu Dhabi. They did, however, accept a fine of £49 million back in 2014 for FFP breaches. PSG were fined €60 million that same year – €40 million of which was suspended – after also falling foul of UEFA’s financial rules, but last year won an appeal against the re-opening of another case against them. PSG chairman al-Khelaifi’s sits on the UEFA board, while Man City’s recent scrape with the football law will only have heightened hostilities between the two sides.

As with PSG, Man City have thus far struggled to match domestic success with glory in Europe, falling in meek fashion to Lyon in this year’s quarterfinals. The English club and their Middle Eastern owners will be watching on from afar when PSG play in the final this Sunday, and it’s no stretch of the imagination to think that they will want the French club to come up short against either Bayern Munich or Lyon.

Others, though, might well question what football has become when bragging rights go beyond the usual tribal rivalry of clubs, and instead extend to the geopolitical tussles of far-off lands. 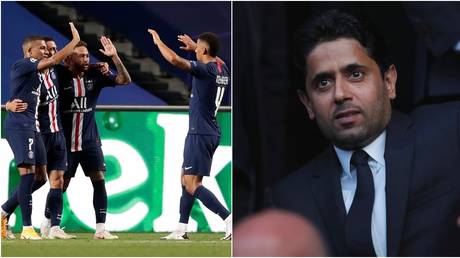