VanZant, 27, suffered a decision loss to Britain Hart in her debut with Bare Knuckle FC back in February, but remains determined to make her mark in the brutal combat sport.

The former UFC contender is just one of a host of camera-friendly female stars BKFC has snapped up, with recent additions including VanZant’s curvy former octagon rival Rachael Ostovich and chesty Invicta MMA favorite Pearl Gonzalez.

ZanVant, however, remains the biggest draw in the women’s BKFC ranks, not least because of her mainstream fame through her stint on US TV show Dancing with the Stars and her army of 2.8 million followers on Instagram, where she regularly shares images of herself in various states of undress to promote her raunchy ‘PaigeFanZant’ website.

This week though, VanZant was keen to showcase her skills inside the ring as she sharpens up for her next bare-knuckle outing.

Being put through her paces with coach Diaz at the Mundo Boxing gym in Florida, VanZant was seen throwing shots with dumbbells in her hands as well as doing some intense padwork.

“.01% better everyday!” VanZant wrote as she shared the footage with fans.

Meanwhile, the BKFC Instagram account took the opportunity to tease an imminent announcement on the next opponent and date for ’12 Gauge’.

“Putting in that work! Fight news coming soon!” read the message from the promotion accompanying the footage of VanZant.

VanZant raised eyebrows when she revealed a multi-fight, multimillion-dollar deal with BFKC last summer after parting ways with the UFC following a run of four defeats in her last six fights with the world’s leading MMA promotion.

The last of those losses came in a first-round submission to Amanda Ribas in July 2020, after which VanZant’s contract with the UFC wasn’t renewed and she announced she was keen to test her worth elsewhere.

A former Sports Illustrated swimsuit model, VanZant said she had made “way more money” from promoting brands on Instagram than she had during her six-year tenure with the UFC.

She was tipped for a potential move to Bellator MMA – home of husband Austin Vanderford – before the news that she had penned a deal with BKFC boss David Feldman as he continues his efforts to bring the brand into the mainstream of the combat sports world.

VanZant’s bare-knuckle induction in February was a tough one as she was outpointed by former pro boxer Hart, 31, at the KnuckleMania event in Miami – although the victor at least credited her opponent with “knocking my teeth out.”

BKFC boss Feldman suggested in March that VanZant could be set for a return in June or July, telling Business Insider: “We’re very happy with her performance, I think she has a future in the sport, and I look forward to having her back at Bare Knuckle Fighting Championship.”

In the wake of her defeat, VanZant had said: “I’m ready to rock. I need to get back in there again. I will say, overall experience, it will be one to remember.

“I did enjoy the moment, (but) I didn’t enjoy the outcome. I enjoyed the moment with Britain in that fight. It was awesome.”

A rematch with Hart was mooted after VanZant began to find her rhythm in the latter rounds of their contest, but the fighter herself insisted she would need to earn that right first.

“I do think we’ll cross paths again. I don’t think I deserve to fight her in an immediate rematch,” VanZant said.

“Yes, we had a close fight, but I don’t see it as close as a lot of the world sees it.” 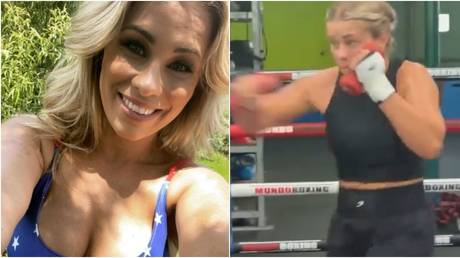