Russian president Vladimir Putin has called Khabib Nurmagomedov to offer his “deepest condolences” over the death of his father and trainer Abdulmanap, who died on Friday from Covid-19 aged just 57.

Kremlin spokesman Dmitry Peskov announced that Putin had been in touch with the UFC lightweight champion to console him upon the death of Abdulmanap, who was first diagnosed with coronavirus in May.

Putin chatted with both Nurmagomedov junior and senior at a congratulatory meeting upon Khabib winning the UFC title against Conor McGregor in October 2018, and reached out to the 28-0 fighter during his father’s illness.

Abdulmanap was recognized throughout the world as one of the game’s best coaches and had trained Khabib from childhood in his family’s basement gym to some of the biggest fights in MMA history.

The elder Nurmagomedov died from complications of Covid-19 in the Moscow military hospital where he was being treated, having never recovered from brain damage brought on by a heart attack and stroke due to infection with the deadly disease.

He was twice entered into a medically-induced coma following emergency heart bypass surgery, and although he woke second time around and his condition was described as ‘serious but stable’, he finally lost his battle to regain his health. 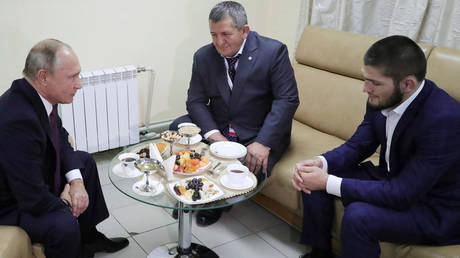 'It's never been discuss...