After Valentina Sampaio became the first transgender model to appear on a Sports Illustrated cover the internet exploded with mixed reactions, some of which didn’t approve the magazine’s choice.

Sports Illustrated has continued its policy of promoting inclusivity and diversity by inviting models representing different social and ethnic groups.

Overturning widespread modeling stereotypes, the magazine featured plus-size model Ashley Graham in 2016 and invited Somali-American model Halima Aden to pose in a hijab and burkini for the cover in 2019.

The magazine’s next step in embracing diversity was featuring openly trans model Sampaio who thanked the annual edition for “respecting her as a human.”

“Thank you SI for seeing and respecting me as I truly am. For understanding that more than anything, I am human.

“Thank you for supporting me in continuing to spread a message of love, compassion and unity for ALL,” the model said.

The magazine’s choice was met with mixed reactions on social media with some users not sharing enthusiasm over the cover.

“That’s a biological man. If he wants to play at being a woman that’s his business but biologically he is a man,” one user wrote, while another added, “I’m just going to speak facts here. Trans men will NEVER, EVER be women and trans women will NEVER be men.”

“If I bake a vanilla sponge and cover it in chocolate icing, does that make it a chocolate cake?” one more commenter wrote.

That’s a biological man. If he wants to play at being a women that’s his business but biologically he is a man.

If I bake a vanilla sponge and cover it in chocolate icing, does that make it a chocolate cake?

While Sampaio’s photoshoot seemingly left some commenters upset, others opted to praise the model for her courage, and complimented her on her beauty.

“She is gorgeous!” another tweeter added.

Now she’s breaking down more barriers for trans models by appearing on the cover of Sports Illustrated’s iconic Swimsuit Edition. 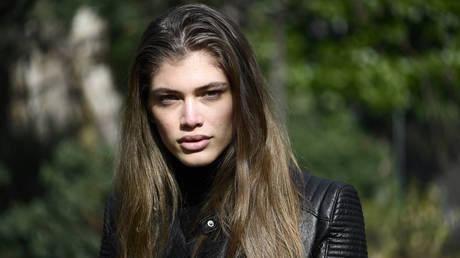