Premier League chief executive Richard Masters says he hopes an announcement on the long-running Newcastle United takeover saga will arrive “shortly,” as he faced a grilling from MPs over the Saudi-led move.

Newcastle fans have been in limbo for the past three months as the Premier League considers a £300 million (US$370 million) bid which would see Saudi Arabia’s mammoth Public Investment Fund acquire an 80 percent stake in the club.

Premier League boss Masters has largely remained tight-lipped throughout the case, maintaining that the process must be confidential as the organization assesses the bid through its fit-and-proper owners test.

But questioned on the takeover by the UK’s Digital, Culture, Media and Sport Committee on Tuesday, Masters indicated that a decision was at last within sight.

“All processes have to conclude and I would like the process to conclude shortly,” Masters told MPs via videolink, the Daily Mail reported.

“In a perfect world, takeovers would happen clearly, cleanly and in a timely fashion. Sometimes things get complicated.

“It is very difficult because it is an entirely confidential process that involves all sorts of due diligence and the application of the owners and directors test.

“When it drags on, sometimes there is a requirement for information. There are legal requirements in place that need to be observed.”

Critics including numerous MPs have been vocal in opposing the step to allow the Saudis into the league, citing the brutal murder of dissident journalist Jamal Khashoggi as among the reasons to block the move.

Masters again faced ire over the Saudis’ human rights record on Tuesday, including from hostile Scottish National Party MP John Nicolson – who claimed it would be “humiliating” if the takeover got the green light.

“The grizzly Prince Mohammed bin Salman, who is (allegedly) implicated in the murder of Jamal Khashoggi, who was lured into Saudi embassy and was then murdered and chopped up into little pieces, (you) could find him passing the fit-and-proper test and taking over a club,” Nicolson said.

“That would be humiliating for you, surely? I just can’t imagine where a person who is implicated in murder can take over an English club?”

Masters declined to comment, but did indicate that the Premier League was relieved that the Saudis now appeared to be taking action against pirate broadcasts which infringed the rights of Doha-based BeIN Sports.

A recent WTO report accused high-level figures in Saudi Arabia of actively promoting the pirate broadcasts by the BeoutQ network, which was seen as part of a campaign against regional rivals Qatar, against whom Riyadh joined a blockade in 2017.

“BeoutQ is now off the air and what we want to do off the back of the WTO report and the efforts that we and other sports have made is for Saudi Arabia to respond positively to the situation and to allow sports rights holders to protect their rights,” Masters said.

The Premier League chief also defended the organization’s takeover protocols as “robust” and “objective,” and said it allowed them “to make decisions that are appropriate.”

While Newcastle fans may have been encouraged by noises from Masters that an announcement could be expected soon, many have still been left frustrated at a lack of information throughout the process.

It has also been pointed out that were the Premier League to block the deal, it would effectively mean barring the Saudis from football while the UK has sold billions’ worth of arms to Riyadh as it wages war in Yemen.

Under the proposed takeover, the Saudi PIF – which is ultimately headed by Crown Prince bin Salman – would gain 80 percent of the North East club, with the remaining share divided equally between UK investor Amanda Staveley and billionaire property moguls the Reuben brothers.

Current Newcastle owner Mike Ashley is desperate to sell the club and is widely despised by fans on Tyneside over his perceived reluctant to invest the requisite funds into the team to restore it to the title-chasing days of the 1990s.

Should the Saudi efforts fail, a rival bid from US media mogul Henry Mauriss is reportedly waiting in the wings to swoop in. 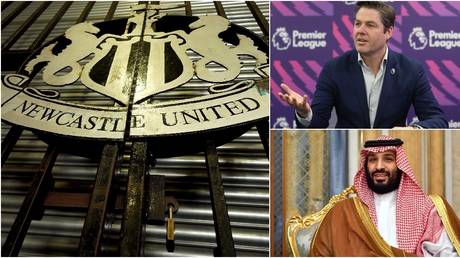