A UK football fan has had an unusual start to his Sunday after he was tagged by Donald Trump in a tweet to his almost 90 MILLION Twitter followers in which the US leader was complaining about Fox News’ coverage of him.

As is often the case with Trump tweets, it is difficult to parse exactly what the tweeter-in-chief was trying to communicate when he tagged Leeds fan Alfred Newman early on Sunday as part of a series of blustering missives which took aim at the likes of Fox News and Democratic presidential candidate Pete Buttigieg, but it is safe to say that the Newman most likely wasn’t the intended target of Trump’s Twitter salvo.

Prayers for the mentions of the random Leeds United fan just wrongly tagged by Trump. https://t.co/ifTUyNkzB5

It is quite likely that Trump was attempting to make some sort of example of Fox News, the news network who have spent most of the past four years trumpeting the president’s talking points. Alfred Newman, it should be noted, composed the famous Fox fanfare which accompanies their broadcasts. He died in 1970, so it is unclear why or if Trump was attempting to tag him in his tweet.

Lately, the marriage of convenience between the two appears strained though, particularly after Fox News appeared to break ranks and call Arizona – and its eleven electoral college votes – for Trump’s Democratic challenger Joe Biden early on in the contentious election week.

Several other networks held off calling the state for Biden but Fox’s projection was proved accurate when the state was officially called for Biden – but this hasn’t dissipated Trump’s anger.

As for the younger, Leeds United-supporting Newman, he has since made his profile private in the wake of being tagged by the seemingly soon-to-be ex-president, so it is unclear if he has reacted to the situation.

His Twitter bio, though, is a succinct glimpse into how he must be feeling on Sunday afternoon.

“Occasionally confused and continually demented self opinionated tit,” it reads, though some would joke that the ‘confused’ part could be best used to describe the haphazard tweeting of the 45th president. 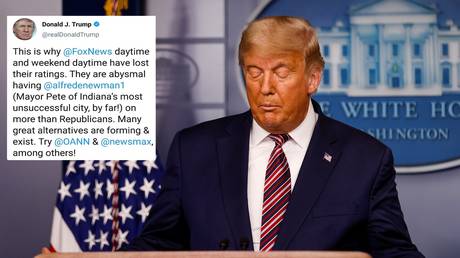