Porto’s Estadio do Dragao has been confirmed as the new host venue for this month’s Champions League final between Chelsea and Manchester City after UEFA bosses opted to switch from the game’s original venue in Istanbul.

Plans to move the location of the final gained steam when Turkey was added to the United Kingdom’s “red list” of countries currently experiencing a large wave of Covid-19 cases, with UEFA reportedly holding talks with Wembley Stadium to host the all-English tie.

The reclassification of Turkey as a coronavirus hotspot – from the perspective of the UK government, at least – would have made it impossible for English fans to travel to the Turkish city, and negotiations were quickly opened with bosses to move the game to an English stadium, with Aston Villa’s Villa Park also understood to have been a candidate.

Those discussions fell apart when UEFA requested special dispensation for media, sponsors and guests to be able to fly in to the UK without having to quarantine, the Associated Press has reported.

The #UCLfinal between Manchester City and Chelsea will now be held at the Estádio do Dragão in Porto.

The decision to move to the final to Portugal, which is on the UK’s “green list” of low-risk countries, means that English supporters won’t be required to quarantine on their return if they travel to the final.

“To deprive supporters of the chance to see the match in person was not an option and I am delighted that this compromise has been found,” said UEFA head Aleksander Ceferin, who also confirmed that 6,000 fans from both finalists will be permitted to attend.

“Fans have had to suffer more than 12 months without the ability to see their teams live and reaching a Champions League final is the pinnacle of club football.

“After the year that fans have endured, it is not right that they don’t have the chance to watch their teams in the biggest game of the season.”

This marks the second year in succession that the Champions League final has been uprooted from Istanbul in favor of a Portuguese city after last year’s final was held behind closed doors in Lisbon due to the pandemic.

The onset of Covid-19 has already seen Turkey lose around two-thirds of its expected visitor income in the past year – and the decision to seize the Champions League from their grasp will be seen as another opportunity missed to revitalize the country’s stagnant tourism sector. 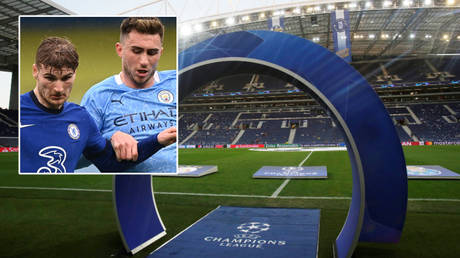