Police say tragic Olympic star Agnes Tirop’s lover left a note admitting to her brutal murder with a knife and club – and her family claim he was part of a property plot targeting her wealth while she was at the Tokyo Games.

Tirop, who smashed the 10,000m world record last month and finished fourth in the 5,000m in Tokyo, was discovered dead in her home in Iten in the western part of the East African nation last week.

Ibrahim Rotich, 41, was arrested while making a suspected attempt to flee the country following a car crash with a truck while in a chase with officer.

Rotich appeared in court on Monday after allegedly murdering the 25-year-old, who suffered stab wounds to her neck and stomach and was found in a pool of her own blood after originally being reported missing.

Kenyan athlete Agnes Jebet Tirop, who represented Kenya 🇰🇪 at the Tokyo 2020 Olympics in the 5000m, has been found dead in her house with stab wounds to her abdomen.

She was just 10 days away from her 26th birthday. Rest in peace Queen! pic.twitter.com/dbqACcTUG6

Police now say that Rotich confessed to committing the crime before then leaving his residence. residence.

Nation says that in the note Rotich left behind, he took responsibility for killing Tirop and claimed that he decided to end her life while adding that their stormy relationship had been full of fights.

“The threshold for murder is overwhelming,” said Munga. “The autopsy report and the suspect’s confession note, together with the murder weapons – a knife and a wooden club, known as a rungu – have given us overwhelming evidence which points to murder.

“The athlete had cuts to her head as well as several stabs in the neck. The rungu exerted blunt force trauma, badly damaging her brain and leading to her death.”

The prime suspect in the gruesome murder of 25-year-old world 5,000m record holder Agnes Tirop, has been arrested. Ibrahim Rotich, who was in a relationship with the athlete was arrested moments ago in Changamwe, Mombasa county, as he tried to flee to a neighboring pic.twitter.com/G2OrhlaM8X

According to the investigation, says Munga, it is clear that Rotich had the intention to kill his partner, with a toxicological analysis set to provide more information.

“We expect the CCTV report, which is also very crucial in this matter, to be out by tomorrow (Friday) and this will show us if there was anyone else who aided or participated in the murder of the athlete,” Munga said.

The confession from Rotich corroborates multiple claims by others the athlete knew that she was a victim of domestic abuse.

The suspect’s parents told detectives their son had called them “while crying, seeking God’s forgiveness, because he had committed a heinous crime” before Tirop’s body was discovered.

Tirop’s younger sister, Evelyn Jepng’etich, who was living with the star and reported her missing, has also told of how she heard a row in her sister’s bedroom.

“Not once, but on several occasions, my sister was savagely beaten. Even on the day she returned from the Olympic games, that night she did not sleep, but was wailing the entire night because of the beatings. In the morning, her face was swollen and bruised,” Jepng’eitch alleged.

“My sister had confided in me that Rotich was abusing her, but she opened up too late. On Monday night, I heard a loud commotion in my sister’s bedroom before she was discovered dead on Wednesday.”

Athlete friends of Tirop have said the couple suffered a strained relationship laden with domestic violence which forced their friend to seek refuge at her training camp.

She is said to have agreed to return to Riotch after a truce was reached before her death.

“She had not been to her home since she returned from the Tokyo Olympics,” said an unnamed colleague.

The adidas family is deeply saddened by the tragic news about Agnes Jebet Tirop.

Agnes was an incredible person, a record breaking athlete and a beloved member of our family.

She will be greatly missed by us all and her legacy will forever live on in our memory. #AgnesTirop pic.twitter.com/VXZQhdw6HL

“She had been physically abused and fled to her training camp within Iten. She only came back to her home on Monday last week following arbitration by Mr Rotich’s friends. She was not seen alive again.

“The domestic wrangles were known to the athletics fraternity, only Agnes was putting on a brave face.”

“Rotich was very jealous and protective of her and, even during massage sessions, he had given express instructions to the massage therapist on the body parts that should be massaged,” claimed another close friend.

Tirop’s father, Vincent, was at pains to emphasize that “my daughter was never married to the suspect.”

“I have never met his parents or even received any bride price. What I know is my child was forced to drop out of school while in Form Three and has since been living with him until her untimely demise,” he added.

Tirop’s loved ones have banned Rotich’s family from attending the burial and cleansed the house where she was killed. They also allege that disputes over property contributed to the dispute.

Nation reported that a spokesman for the Tirop family, Jeremiah Sawe, said they have discoved that parts of the property changed ownership three months ago.

“We have learnt with utter shock that the majority of our daughter’s property has mysteriously changed hands,” said Sawe, reading a statement.

“What is shocking is that the property changed hands three months ago and some have been disposed of by her lover, who is also the prime suspect in the murder.

“We are now convinced she was killed because of her wealth.”

Postmortem examination reveals that injuries due to stabs on the neck and blunt-forced trauma led to the death of Olympian Agnes Jebet Tirop.#NTVTonight pic.twitter.com/KUrqap54lS

Land close to the University of Eldoret forming part of the property was allegedly sold for around $81,044, with Sawe confirming that 12 plots have been signed over to new owners.

“The suspect has made the property his and we believe the deceased was not aware, or was under duress,” Sawe added.

“Also, there are no documents for several vehicles bought by the athlete and, shockingly, another car is registered under one of the suspect’s friends, also in police custody.”

Munga said that the statements on this were “allegations until proven otherwise”, but insisted the authorities would “leave no stone unturned” during their investigation.

I call on relevant authorities to work round the clock to ensure speedy justice to the family and friends of the late sports icon Agnes Tirop. pic.twitter.com/AWnVWk2G9z

“Crime can be committed in series and in several avenues,” said Munga. “In this particular case, we are basing our probe on reverse and forward investigation. We might arrest more suspects in the course of our investigation.”

“Already, we have engaged lawyers to pursue the recovery of the assets and we expect caveats on already sold plots and vehicles,” said Sawe.

“This was her property, obtained through sweat and blood, and the best way to honor her is to have her properties back.

“We are calling on the government to help us recover all these properties and ask those that might have fallen into the unscrupulous ways of the suspect and bought any asset belonging to the deceased to contact us.” 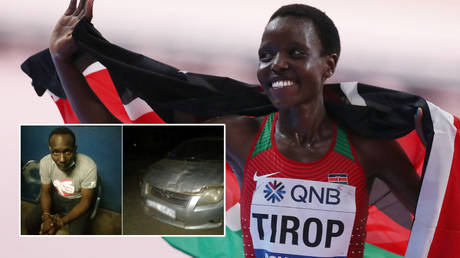