‘Poles don’t like Russians, that was clear’: Football pundits rip into Polish official after Russia lose to Turkey for first time

‘Poles don’t like Russians, that was clear’: Football pundits rip into Polish official after Russia lose to Turkey for first time

Polish referee Szymon Marciniak came in for heavy criticism from Russian football pundits and former players after their country’s contentious 3-2 defeat against Turkey in the UEFA Nations League.

Russia were forced to play the majority of the match with 10 men after defender Andrey Semenov was given his marching orders in the 24th minute at the Ulker Stadium in Istanbul, while the hosts also benefitted from a second-half penalty awarded in their favor.

“The officials for the match were villains. It’s a shame when you go out to play football, and then someone appears in black who starts their own concert and that affects the result of the match,” fumed former forward Pavlyuchenko.

“The Polish referee brutally killed our team. He gave a penalty which wasn’t close to being one. He sent off Semenov, who in no way deserved to be sent off. I just don’t understand how you can influence the result, and how you could feel good afterwards.

“You could make the conclusion that the Polish officials killed the game. Poles don’t like Russians, that was evident straight from the match,” added the 38-year-old.

That view was shared by former Russia and Zenit St Petersburg winger Vladimir Bystrov, who accused UEFA official Marciniak of “putting on a Turkish shirt” to help the hosts, in a match which was played without the use of the Video Assistant Referee (VAR).

“You don’t need to say much. There was no VAR, and the referee did what he wanted. From the 24th minute he put on a Turkish shirt and helped that team to win,” said Bystrov, who was capped 47 times by his country.

He added sarcastically: “[The referee] did everything right, sent off a player and gave a penalty. The player won the ball, it wasn’t even close to being a penalty.”

🤔 Is this a penalty? pic.twitter.com/Wp0G36QvJg

Russia had begun brightly in Istanbul, capitalizing on a sloppy attempt to play out from the back by Turkish goalkeeper Mert Gunok to take the lead through Valencia winger Denis Cheryshev in the 11th minute.

Then came the first major moment of controversy when Semenov tangled with Turkish skipper Cenk Tosun on the edge of the box as the forward raced towards goal.

There was definite contact between the pair before Everton forward Tosun went to ground, although the striker appeared to have a handful of Semenov’s shirt.

Russia captain Georgy Dzhikiya also looked as if he could have covered back, meaning his fellow defender was not necessarily the last man.

Marciniak was around 20 yards from the scene and may have had his view at least partially obscured, but nonetheless immediately brandished a red card at Akhmat Grozny defender Semenov.

Leicester winger Cengiz Under then put the hosts ahead six minutes later with a fine curling finish past Russia goalkeeper Guilherme from just inside the penalty box.

Seven minutes into the second half and Turkey had a two-goal cushion after another bone of contention, this time over the penalty awarded when Daler Kuzyaev was adjudged to have fouled Fenerbahce midfielder Ozan Tufan inside the box.

Polish official Marciniak pointed to the spot without hesitation, even though Kuzyaev appeared to make clear contact with the ball before a theatrical dive and roll from Tufan.

Tosun converted the penalty, and while Russia rallied to reduce the deficit through a strike from Kuzyaev five minutes later, the hosts held on for a first ever win against Russia at the eighth time of asking – although they did beat the USSR back in 1975.

Russia manager Stanislav Cherchesov remained diplomatic after the match, saying he did not want to focus on the officiating – but did label the penalty decision “dubious”.

“We played compactly and systematically for the first 25 minutes. The problems began for us after the dismissal… The penalty was dubious. In my opinion, it was wrong,” the Russia boss said.

Turkish counterpart Senol Gunes meanwhile said that after a lackluster start, the final score was a big boost for the entire nation.

“We lost far too many balls. We couldn’t keep up with our opponent. But we fixed our game later on, and when they were left with 10 men, we started to push them. We were better in the first half,” Gunes said.

“They are a physically great opponent. I congratulate my players for their efforts and their desire to win. The players and the whole country needed a win like this.”

The result leaves things finely balanced in League B Group 3 heading into the last round of matches this week.

Russia still stand top on eight points, level with Hungary but with a superior head-to-head record. Turkey are back in contention on six points.

Cherchesov’s team know that whatever happens, they will win the group and be promoted to League A if they beat Serbia in Belgrade on Wednesday. Hungary host Turkey at the same time in Budapest.

Russia will again be without usual captain Artem Dzyuba for the game against Serbia, after he was dropped from the team following the leak of an X-rated video online earlier in November.

The suspended Semenov will also be absent for that match, as will fellow defender Fedor Kudryashev and midfielder Roman Zobnin. 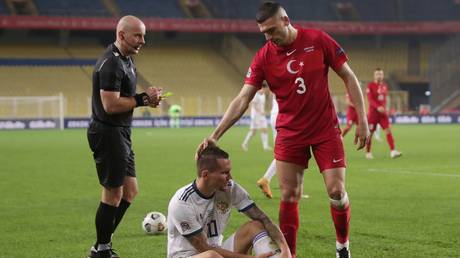 'Tripping over themselves to...