The announcement by Formula One team Mercedes that their cars will be clad in black livery this season is the latest sign that sport is locked in a vacuous, virtue-signaling race to the bottom.

In what reeked of a move to placate their star man Lewis Hamilton, Mercedes this week announced that for the 2020 season their cars would depart from their traditional silver arrow colors in favor of a predominantly black design in honor of the Black Lives Matter movement.

“The Black Lives Matter movement has shone a searching light on how much we need new measures and actions in the fight against racism and all forms of discrimination,” said a statement from the team, appearing to believe that adding a new coat of paint to their cars would somehow help combat the lack of diversity which six-time world champion Hamilton has argued is rife within motorsport.

A black star in a white-dominated sport, Hamilton has been F1’s most vocal critic during the latest wave of Black Lives Matter unrest, shaming teams and fellow drivers with claims that their silence effectively equates to complicity in sustaining inequality.

With Mercedes’ gesture – which has been accompanied by a pledge to bring in a more diverse range of talent throughout the team – it seems they have at least bought some time with their main man Hamilton, also picking up a few virtue-signaling bonus points along the way.

But one suspects that putting Hamilton onto the podium in his new all-black car will be the straightforward part for Mercedes when the season belatedly begins in Austria this weekend; much, much harder will be following through on their diversity pledge, especially as the team’s own research indicates that just 3 percent of their workforce belong to ethnic minority groups.

In light of those figures, superficial car changes in a sport which loves nothing more than tinkering with designs and engineering seem very much like the easy option.

But Mercedes are far from the only ones engaging in increasingly populist but ultimately superficial displays of caring about causes such as the Black Lives Matter movement.

Football is another prime example. When the English Premier League recently returned from its coronavirus hiatus, it was no longer enough for players to celebrate a goal by taking a knee or flash an undershirt with a supportive message.

There were similar scenes when US women’s soccer players took a knee at the weekend, with only a handful risking opprobrium by daring to stand for the playing of the anthem.

The NBA, meanwhile, plans to paint ‘Black Lives Matter’ across courts when it finally emerges from its Covid-19 shutdown at the Walt Disney Resort in Orlando at the end of July.

There are numerous other examples as sports around the world fall over themselves en masse to prove just how much they care about a movement which, if they answered honestly, many athletes will give little thought to once the current protest bandwagon has moved on.

The argument will be, of course, that shows of solidarity can do no harm, that those involved in them are well-meaning, and that any gesture which helps raise awareness is a good thing.

True, only the most obnoxious of observers would argue against authentic attempts to stamp out racism.

Also true is that when taken selectively and with a genuine grievance to bear, sporting protests can be a powerful, moving force. We’ve seen numerous examples of that down the years, and there are athletes around the world of all colors and creeds who genuinely care about the anti-racism cause.

But the danger now – as with Mercedes – is that we are straying into increasingly flashy and gimmicky displays of so-called caring which risk making a mockery of the underlying message.

A comparison which readily comes to mind is Remembrance Day in the UK and Commonwealth, marked each November 11 in honor of members of the armed forces who have died in the line of duty.

Typically symbolized by the wearing of a poppy, in recent years the surrounding commemorations have become ever-more cringeworthy and, in cases such as a human poppy mascot taking to the pitch in one football match, openly laughable.

Displays such as this only serve to incite cynicism, eye-rolling and ridicule, and it’s not a stretch of the imagination to see this is where we are heading with sport’s anti-racism protests.

When sport is awash with gimmicks, the underlying issues risk getting drowned. People pat themselves on the back for superficial gestures of support when in reality sport, as with society, would be better off without sporadic, superficial shows which change little, and should instead get their head down and solve the deeper, more complex issues.

So painting it black might be an eye-catching step from Mercedes, but a promise to boost the diversity of their workforce will be a much tougher test of their professed commitment to the anti-racism cause.

We await to see if they get off the starting grid with that particular pledge. 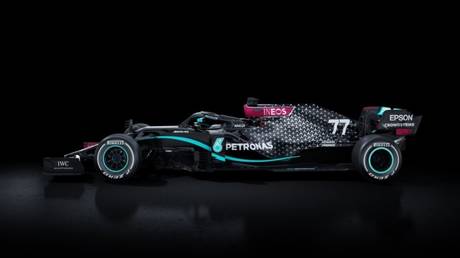