Khamzat Chimaev has challenged several fighters in numerous weight classes in recent weeks, but did the surging UFC star bite off more than he could chew when he challenged former heavyweight champion Daniel Cormier?

Chimaev announced his entry to the UFC this year with three wins across two weight classes in the span of just 66 days – all while absorbing just TWO strikes – and has spent much of the time since calling for fights with all manner of household names, including Chris Weidman, Demian Maia, Stephen Thompson and, more recently, Darren Till.

One man who did take up the challenge, though, was the recently retired former two-weight world champion Cormier, who couldn’t resist showing off his wrestling prowess against “Borz” – even if it was outside a hotel lobby in Abu Dhabi in advance of the UFC’s latest event on “Fight Island.”

The video shows Cormier, who outweighs Chimaev by around 50-60lbs, tussling with the undefeated Chechen-born Swede as they traded positions.

Chimaev eventually shot for an inside leg trip – something that the two-time Olympic wrestling qualifier Cormier was clearly ready for.

“He’s a strong guy, huh?” Cormier says to the camera as the two trade under and overhook positions.

At one point, Cormier reverses Chimaev and says: “See this, Khamzat? This is because I know what I’m doing.”

Cormier, who is considered to be among the best pure wrestlers to have ever competed in mixed martial arts, announced his retirement from the sport earlier this year after losing his heavyweight title rubber match with Stipe Miocic. But, despite no longer being an active competitor, some are pointing out on Twitter that “DC” was going easy on the UFC upstart.

“If DC wanted to lift the guy he would with a sneeze,” one fan wrote online.

“He is playing with a child here.”

Another wrote that the footage looked like “Morpheus fighting Neo.”

Chimaev’s next move in the UFC remains uncertain. He has been engaging in several social media exchanges with UFC star Darren Till regarding a potential fight next year, but welterweight veteran Neil Magny has also revealed that he has accepted a fight with Chimaev – and says that any hold-up in agreeing the deal is purely down to Chimaev and his representatives. 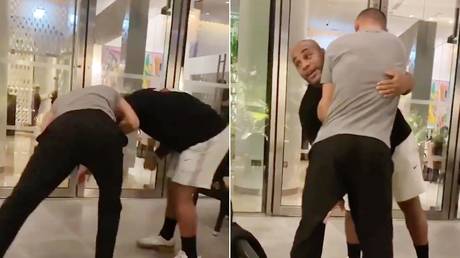 'They’re gonna use every excu...

Man who beheaded French teacher &a...